Final Blog - Back In Raleigh, NC

I aptly referenced this blog as "the experience of a lifetime" and it has certainly turned out to be so and easily a highlight of my IBM career.  I'm not sure if that's attributed to the fact I have no highlights in my IBM Career (smile) or the program is just that great!!  It really is amazing how much occurred and how time flew over the last four weeks.  I am back in Raleigh now and still playing in my mind the experiences, new relationships and learnings that have occurred.  For my IBM friends, I can only say that you MUST give this program serious consideration as I personally think its the most unique and genuine IBM experience I have ever had.

We met a Tourism Director in South Africa(SA) who bedazzled us a bit with his impressions and knowledge of local trivia starting each phrase with "Did you know..".  He did this for about 15min but I suspect I will be much shorter.  Some of these you won't know but some you may be aware of.  I am doing this ad lib so we will see how it goes:

...IBM's Corporate Service Corps(CSC) has been in existing since 2008, has had 2,400+ members who've   worked on 30day humanitarian projects in over 34 countries around the world!

...For my project, we had 14 members from 8 different countries as part of the IBM Team.  We actually started with 15members and 9 countries but one young lady from the Netherlands had to defer her selection.

...South Africa has nine provinces and we spent 3 of our 4 weeks in the North West Province which is  known as the "Platinum Belt" due to the number of mines,  90% of the worlds platinum is in SA!!

...Our project was focused on supporting our client's(iNeSI) efforts to enhance e-literacy amongst SA citizens to ensure the country is competitive in the global marketplace and able to take advantage of new technology in their personal and work lives..

...We worked on 4th of July.  Rightly so, nobody cares about USA independence in South Africa!

...The beaches in Cape Town have the coldest sea water in their summer months due to the Antarctica annual melt...crazy!

...South Africa’s drinking water is rated 3rd best in the world for being “safe and ready to drink”.

...Cape Point, nor the Cape of Good Hope, is the Southernmost point of Africa.  It is also NOT where the Atlantic and Indian Oceans meet.  Still makes for a classic photo!!


Our Last Days in South Africa....
Our last week of work was not surprisingly focused on finalizing our client presentations and documentation related to our project.  This culminated into a single 3 hr+ presentation event, attended by Client, local dignitaries, IBM Execs, key stakeholders and other companies with these interests like Cisco and Microsoft.

Enough typing for now...pictures and videos will do most of the talking from here on my final expereinces...

I have never been to Africa so I have never been to Cape Town of course but I can assure you that it won't be my last time.  The weather was amazing and we were quite fortunate because although it rains a bit this time of year, we had 0 inches of rain during our 5 days in Cape Town. 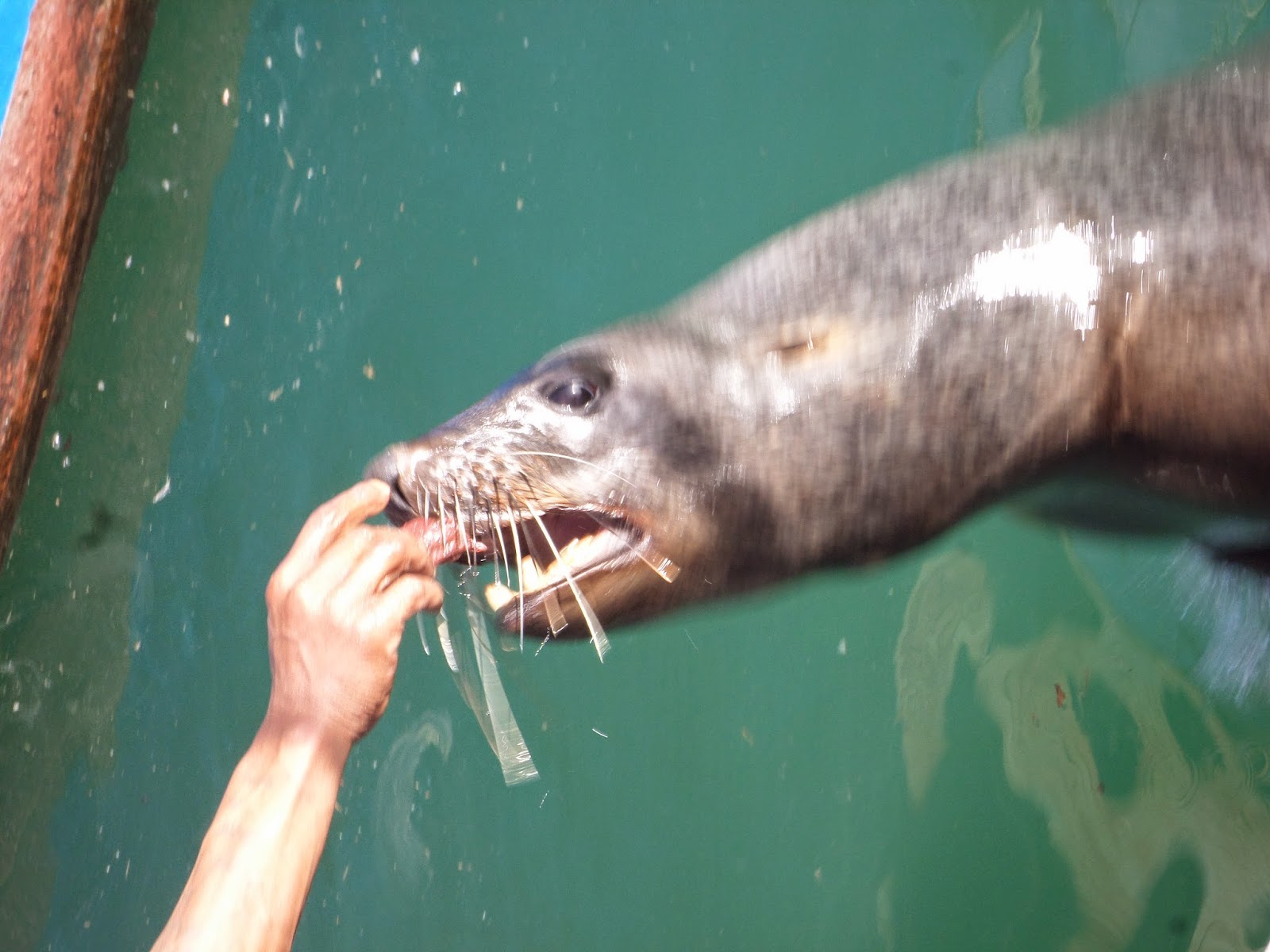 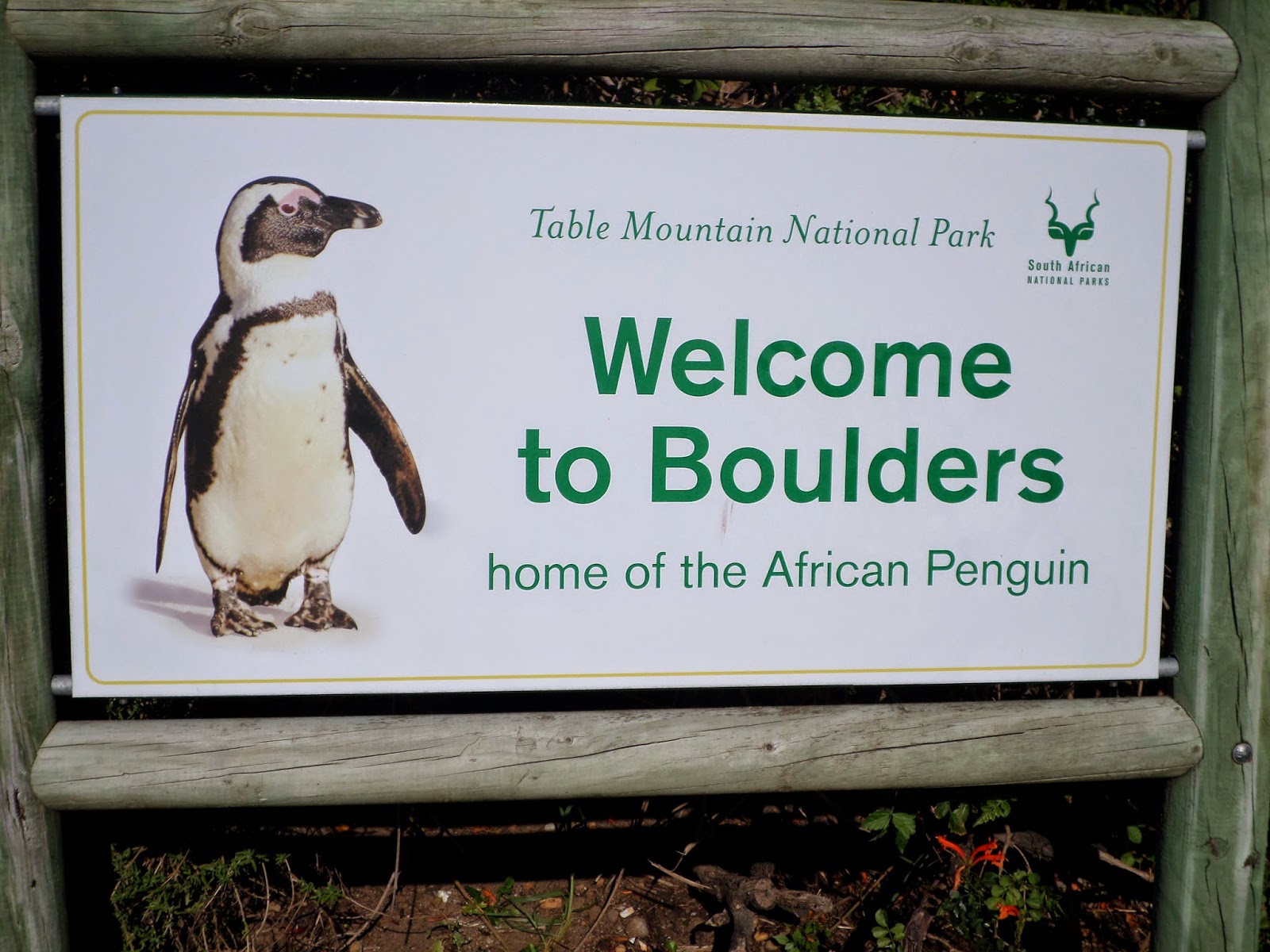 I thank you for joining me on this journey.  I hope you enjoyed the experience and insight, but I've learned well that words and even pictures can't express it all completely.

Our Final Two Days in Mahfikeng....

Well it is hard to imagine that we are into the home stretch.

Departing Mahfikeng and Returning to Johannesburg:
3 weeks have flown by very quickly and we are preparing our final presentations and collateral for the client this week.  We left Mahfikeng on Wednesday AM and returned to Johannesburg where we will conclude our stay.  I figured I would capture some memories that may be connected or disconnected.  As the author of this blog I retain full editor rights which is great.

My Corporate Corp Services Sub-Team:
I have the pleasure of working with two talented team members and one graduate student Bokang that have been great.  Aruna(L) is from Austin Texas through India and Paola is from Costa Rica.  We call ourselves the "Dream Team" but perhaps I might have declared that myself but I can't seem to recall. 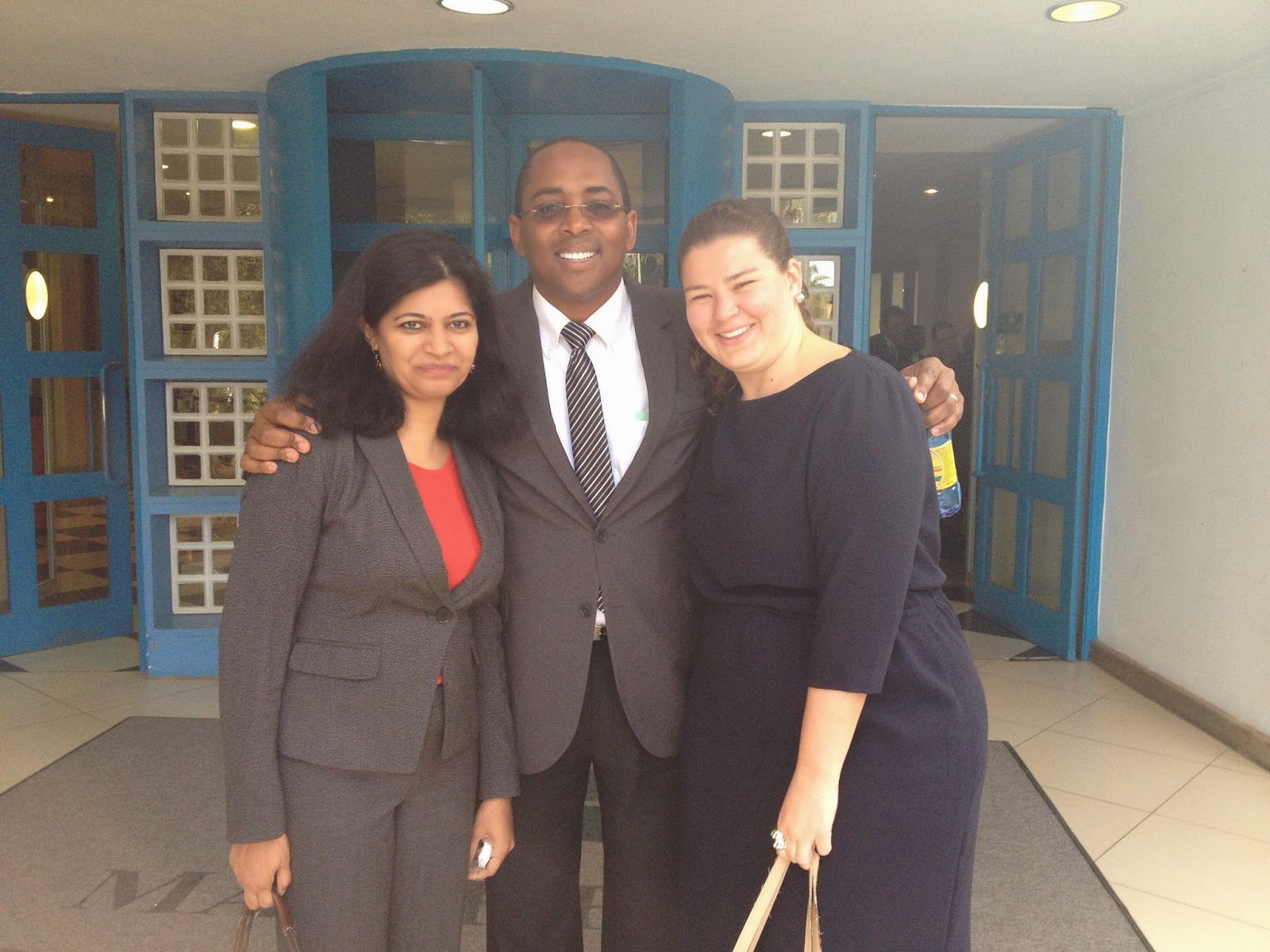 The Hotel:
The hotel we have stayed at in Mahfikeng is the Mmabatho Palms Casino Hotel.  As many of you know, I do not gamble so not one penny has gone into the Casino since my last 3 weeks here. 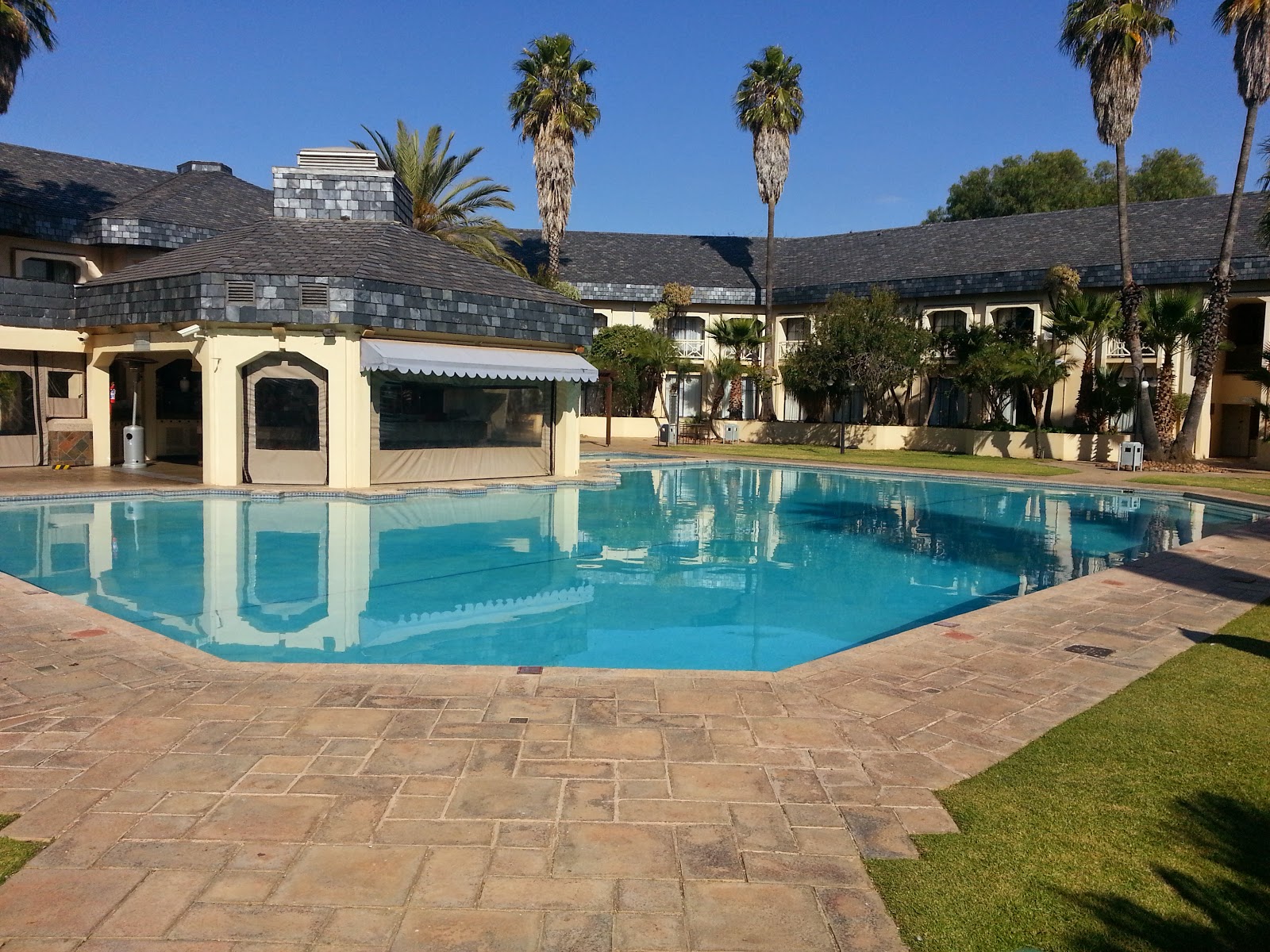 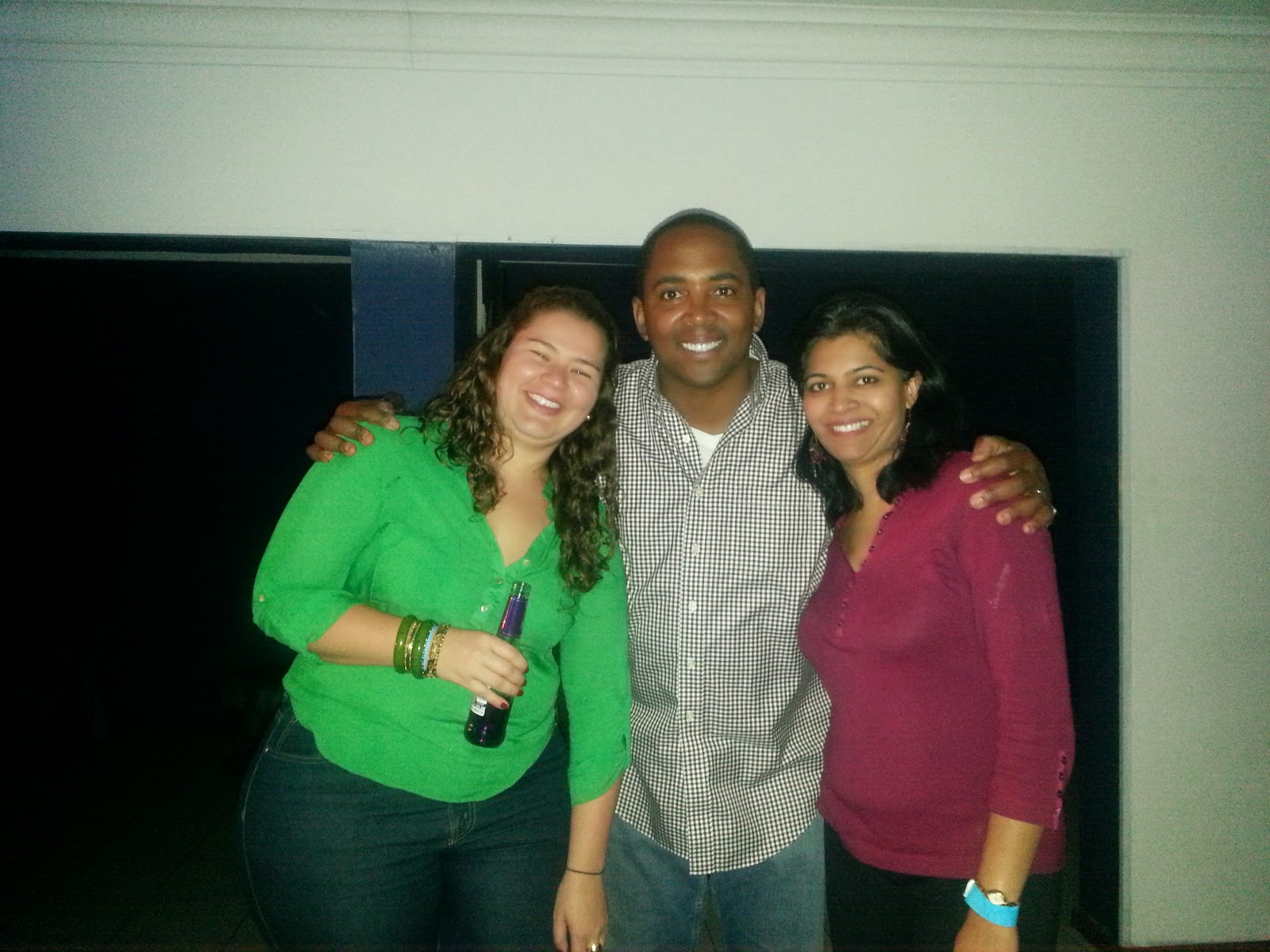 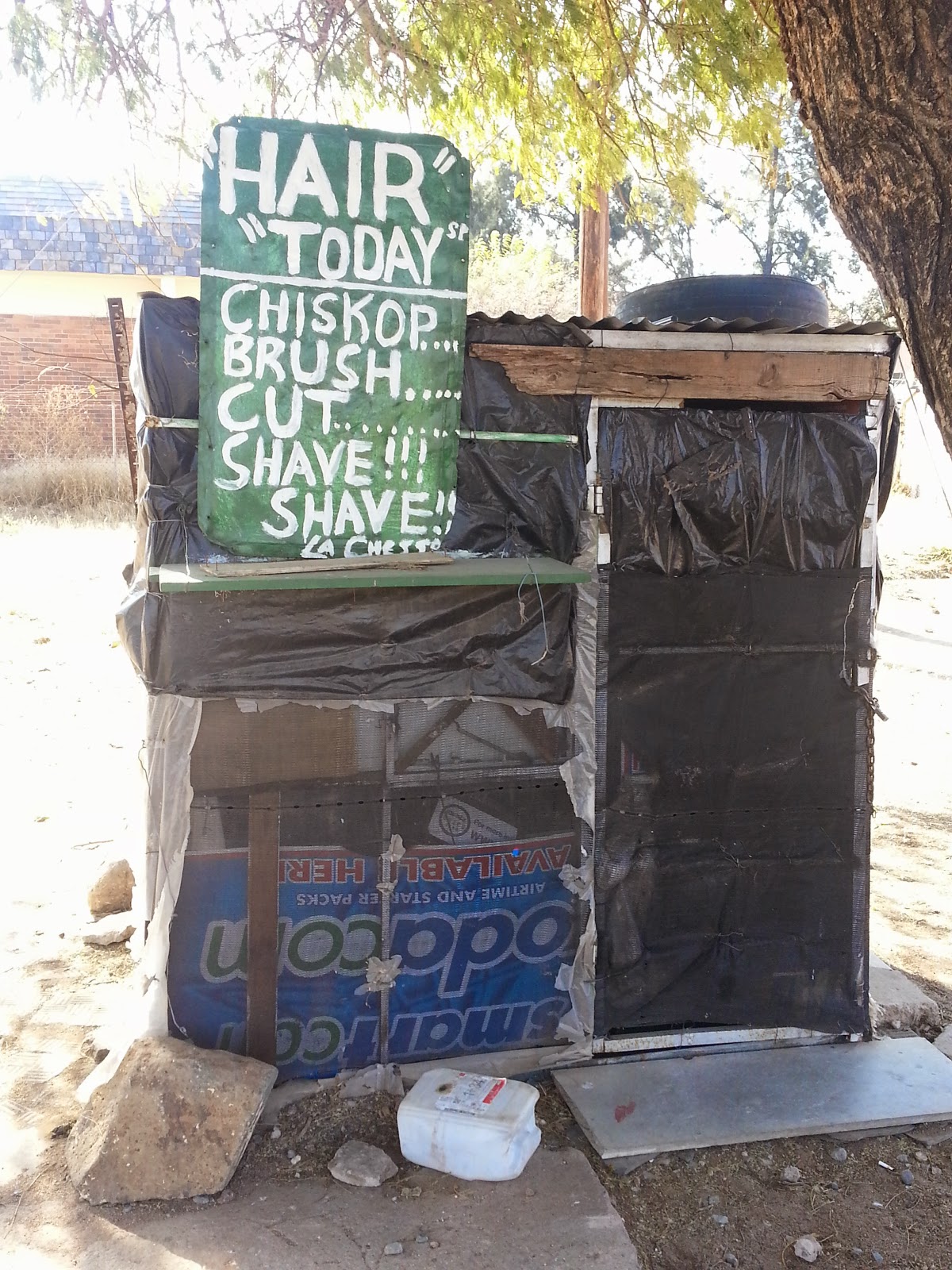 Indeed I got may haircut while I was here in Mahfikeng, but it was not truly here.  The guy doesn't even post prices!

The South African Food:
The food has been really good since we have been here.  Although we have been in South Africa for a few weeks, it would not be the case that we actually have been eating just traditional cuisine.  Most of the food we have eaten has been at the Hotel as there are limited alternatives in rural Mahfikeng. That being said, we have certainly had our fun eating the food and it has caused my waistline to be in an ongoing race for my age!!  The South African love meat for sure and less so on the vegetables. I have made the command decision that I will delay my annual physical by a month so I can focus on "regulating" my vitals again once I return to the states.... now onto the food.

Kingclip, which is a great fish and my favorite one in South Africa.  It's often fried but I have tried to have it grilled mostly and it often comes with chips, aka Fries. 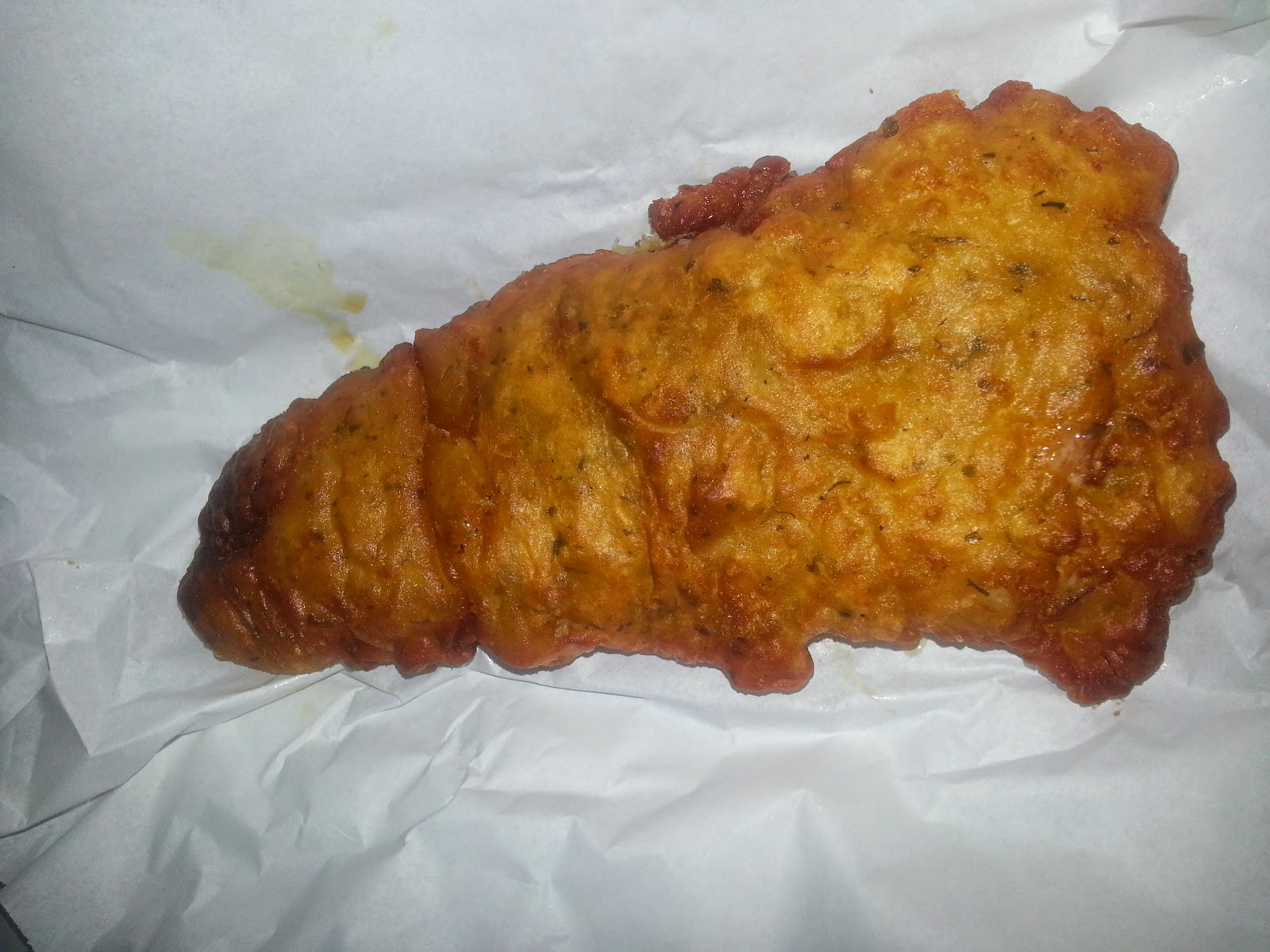 Although the Kingclip fish is very healthy and low in fat is often accompanied with chips that balance things out. As you can see from the SMALL order of fries below they likely absorb most of the oil that they are cooked in. 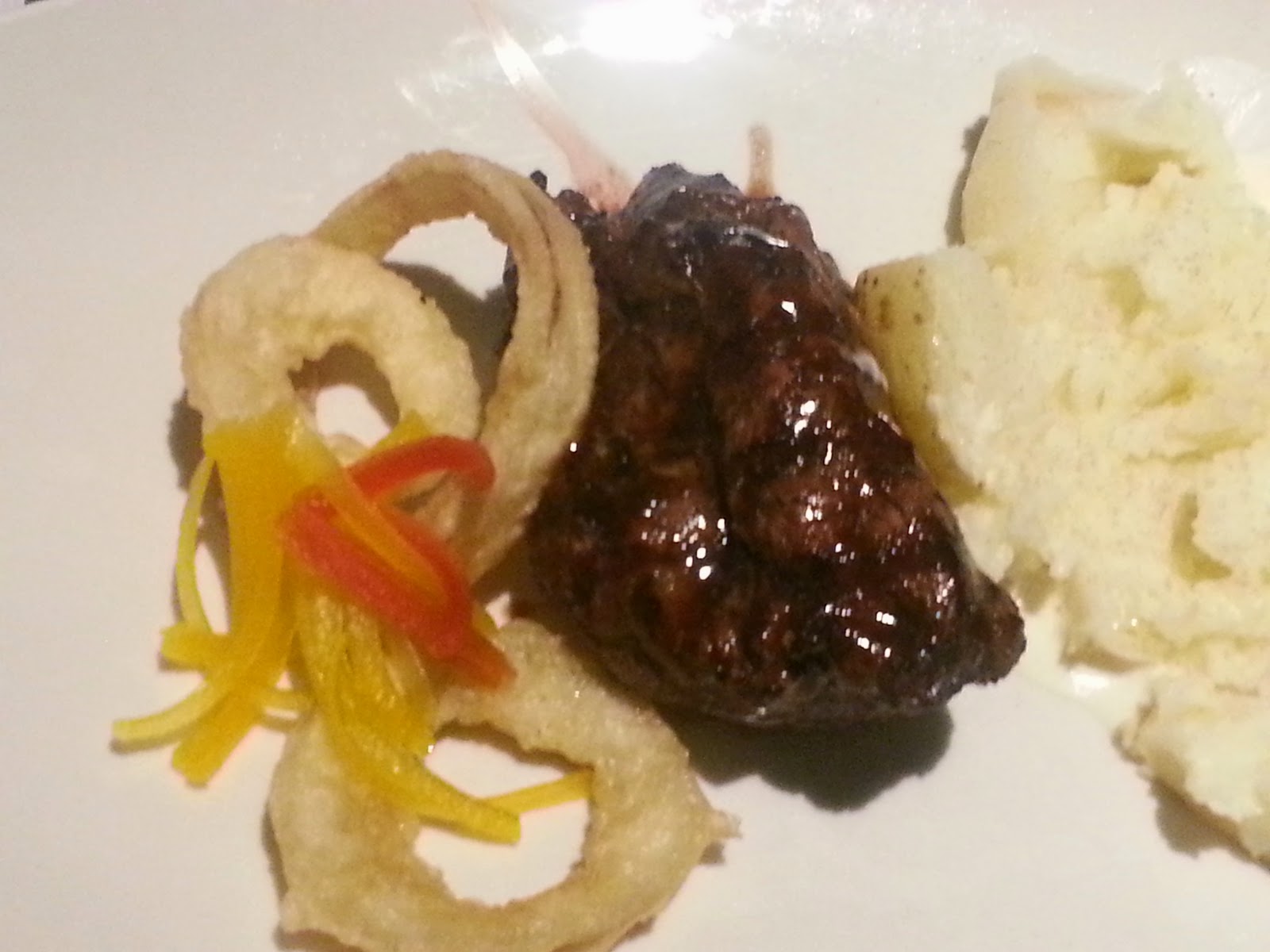 Pap is a popular local corn starch served with entrees.  It has a look and taste of grits mixed with mash potatoes. Similar to grits, its almost more interesting what you are having with it than the pap itself.
From the left is onion rings, filet and pap. 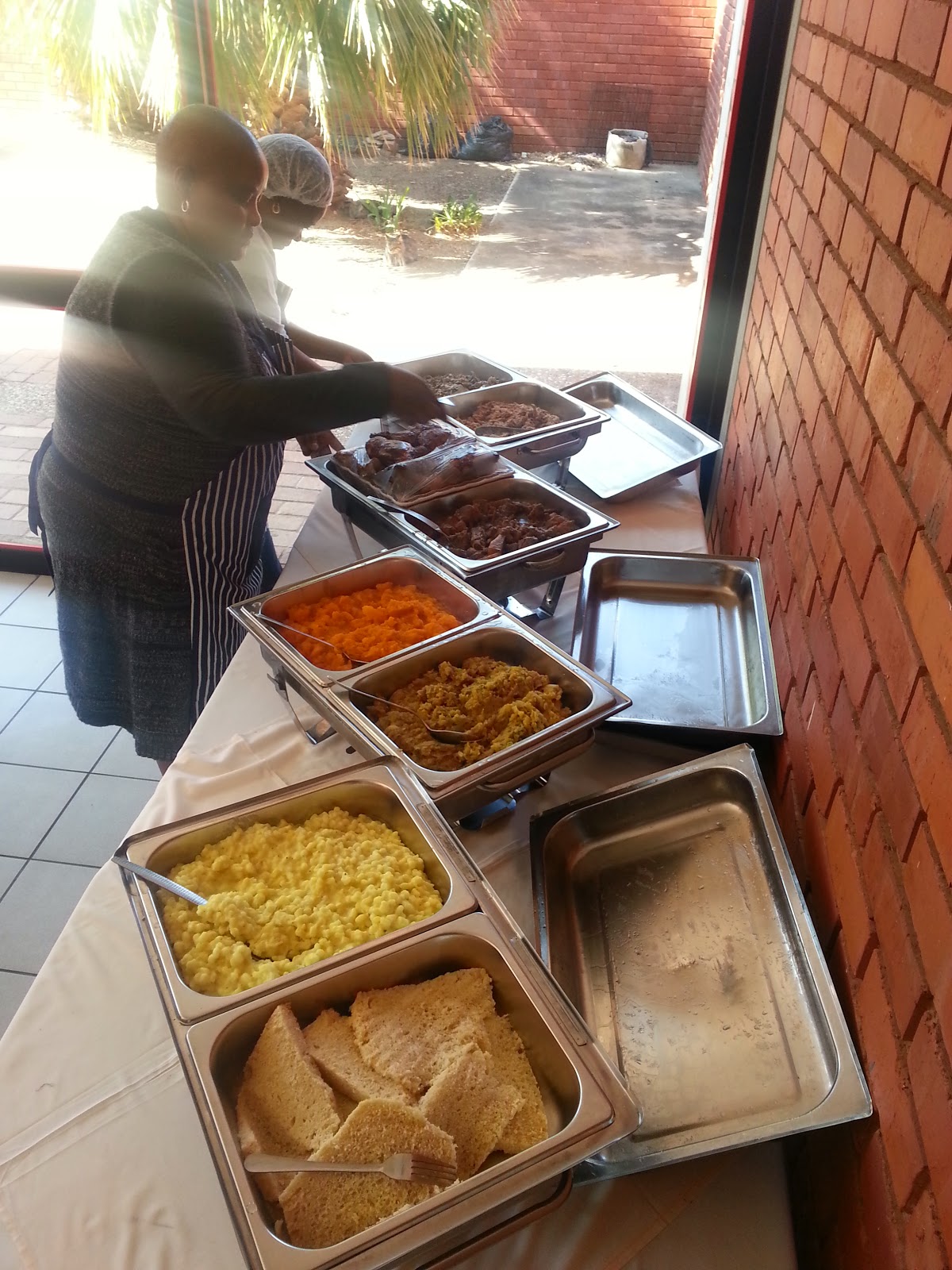 The picture above is a campus Lunch Buffet that they arranged for us on two occasions
Chicken breast is in the center, and looking at the 1'oclock position and going clockwise you have: 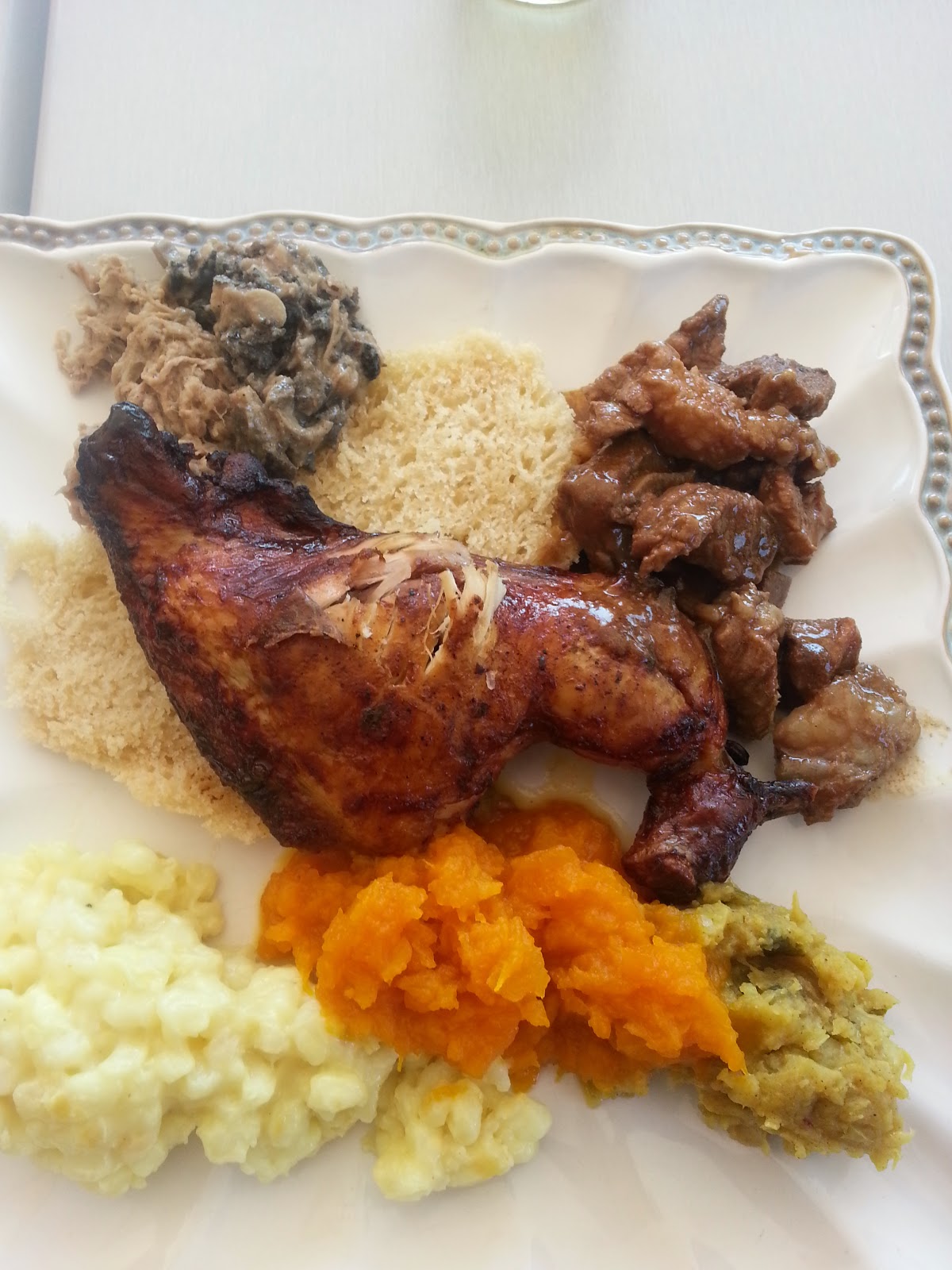 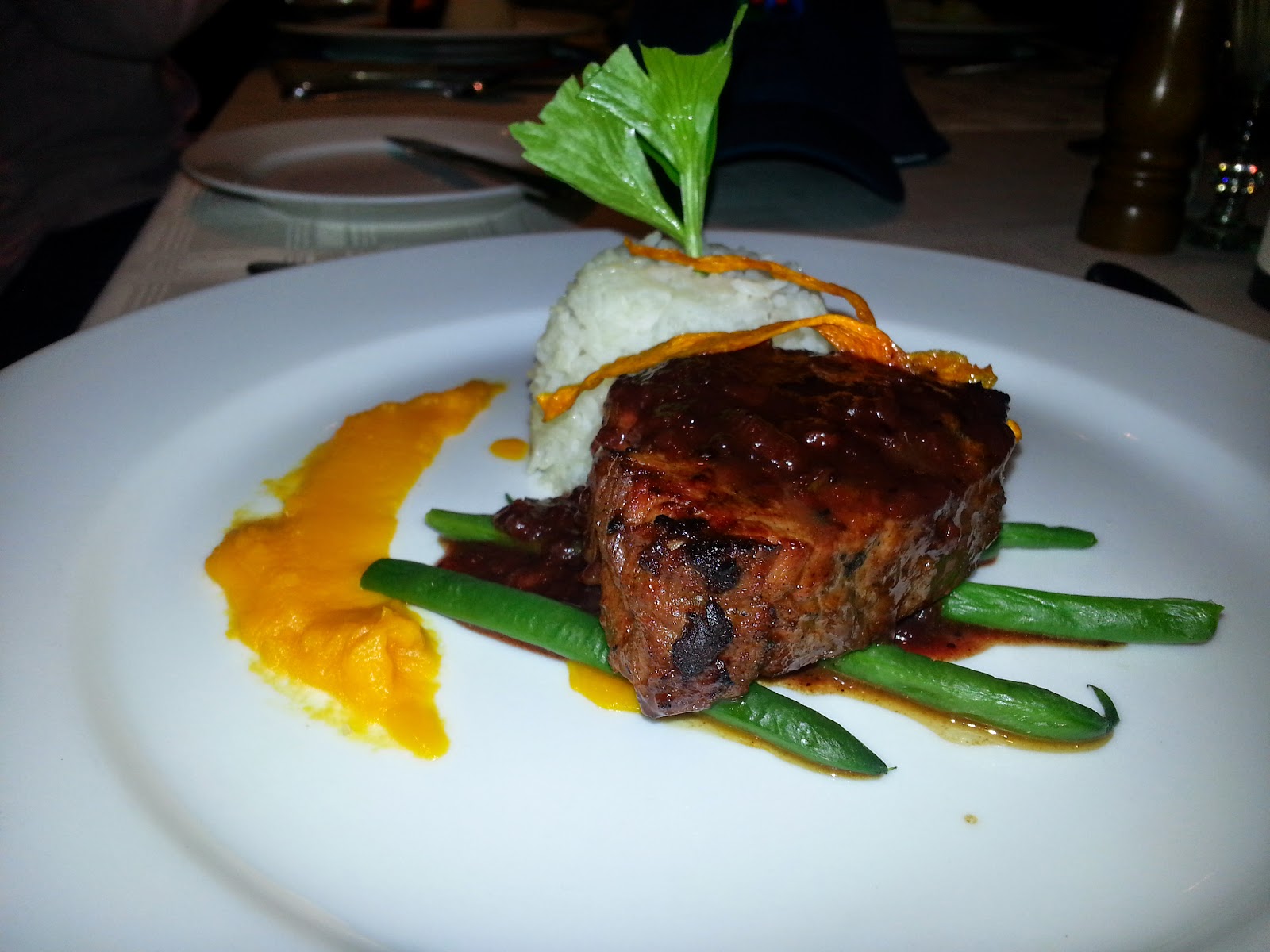 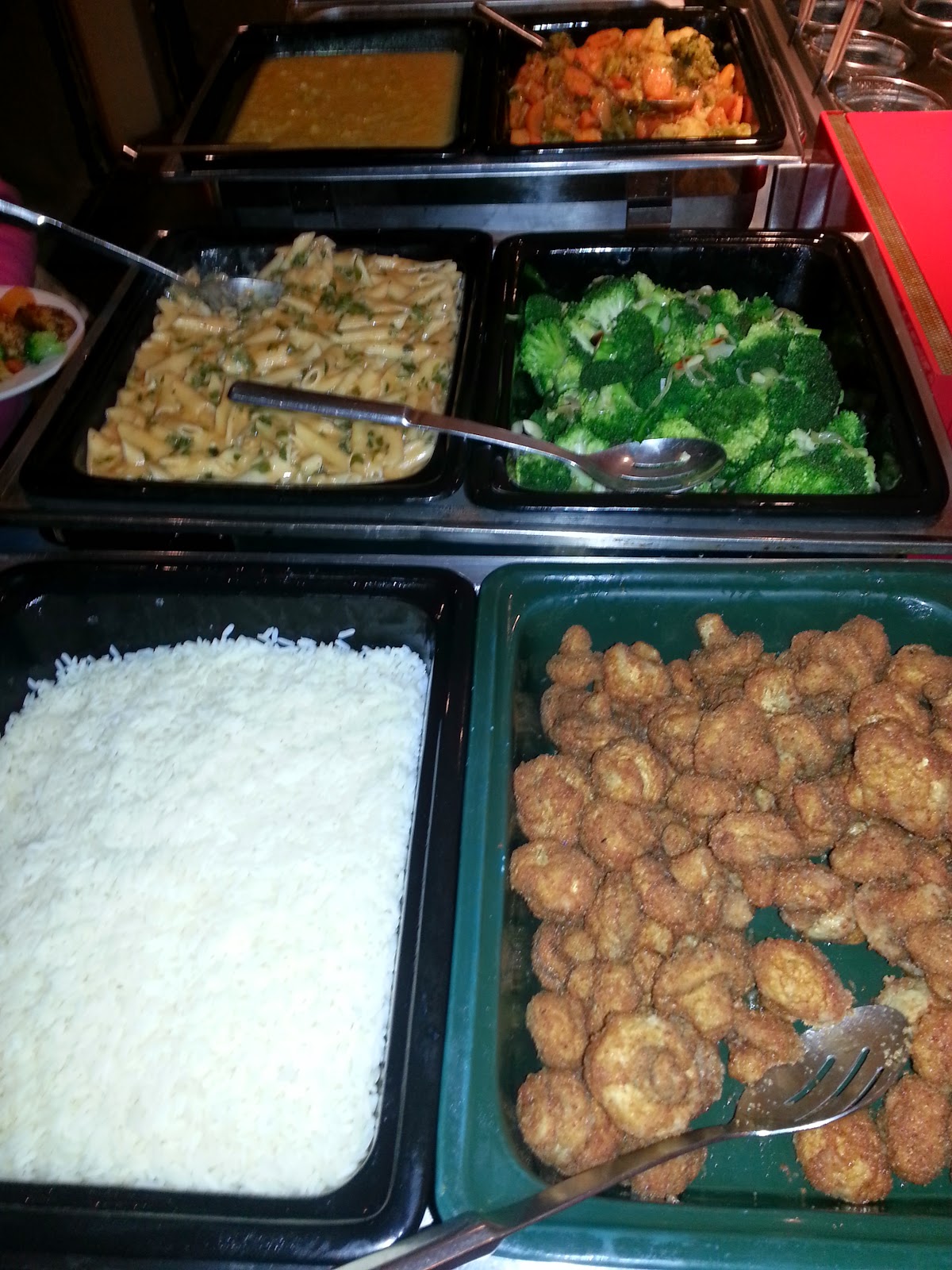 Vegetarian buffet we had arranged for our Vegan Teammates 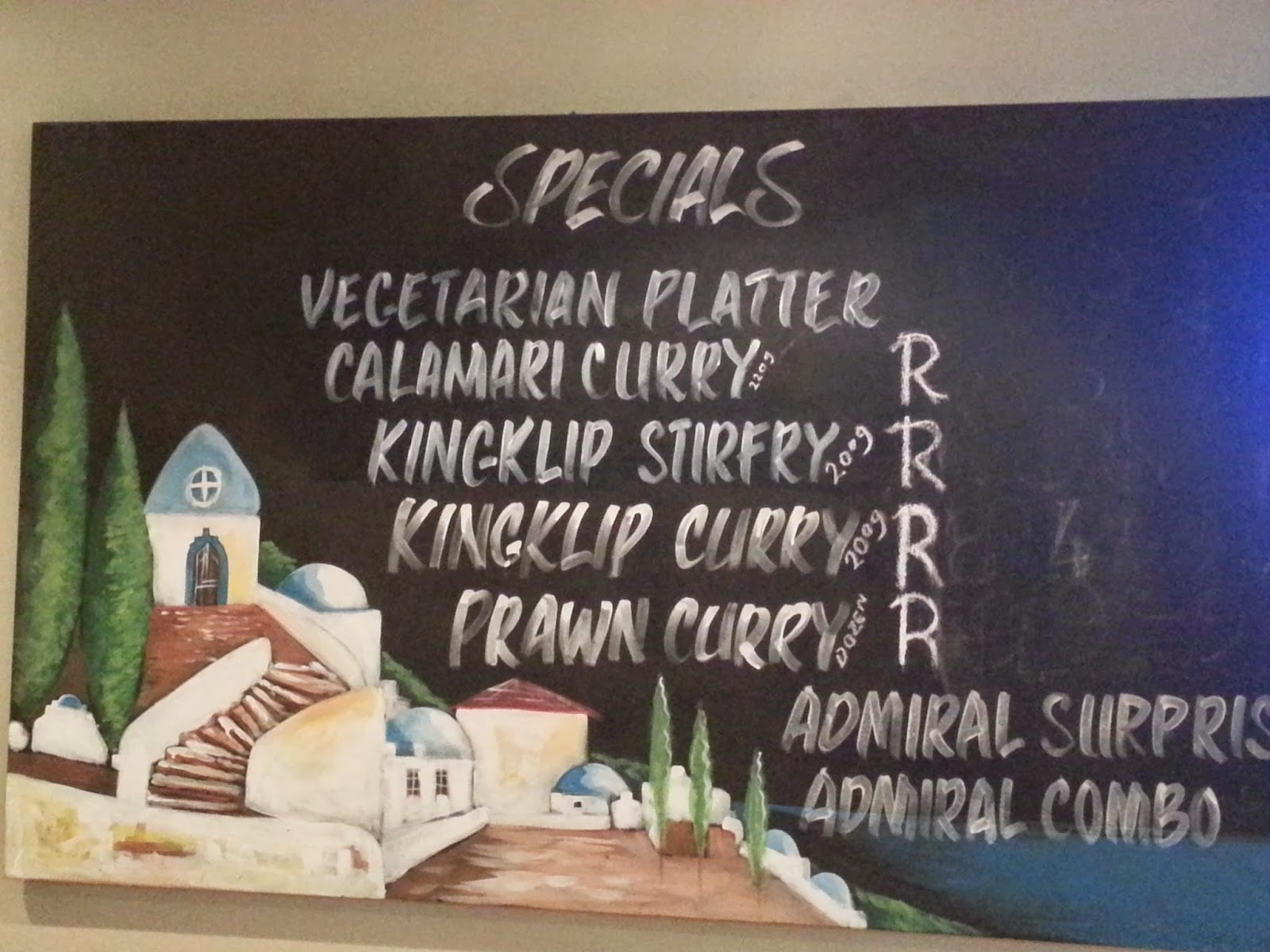 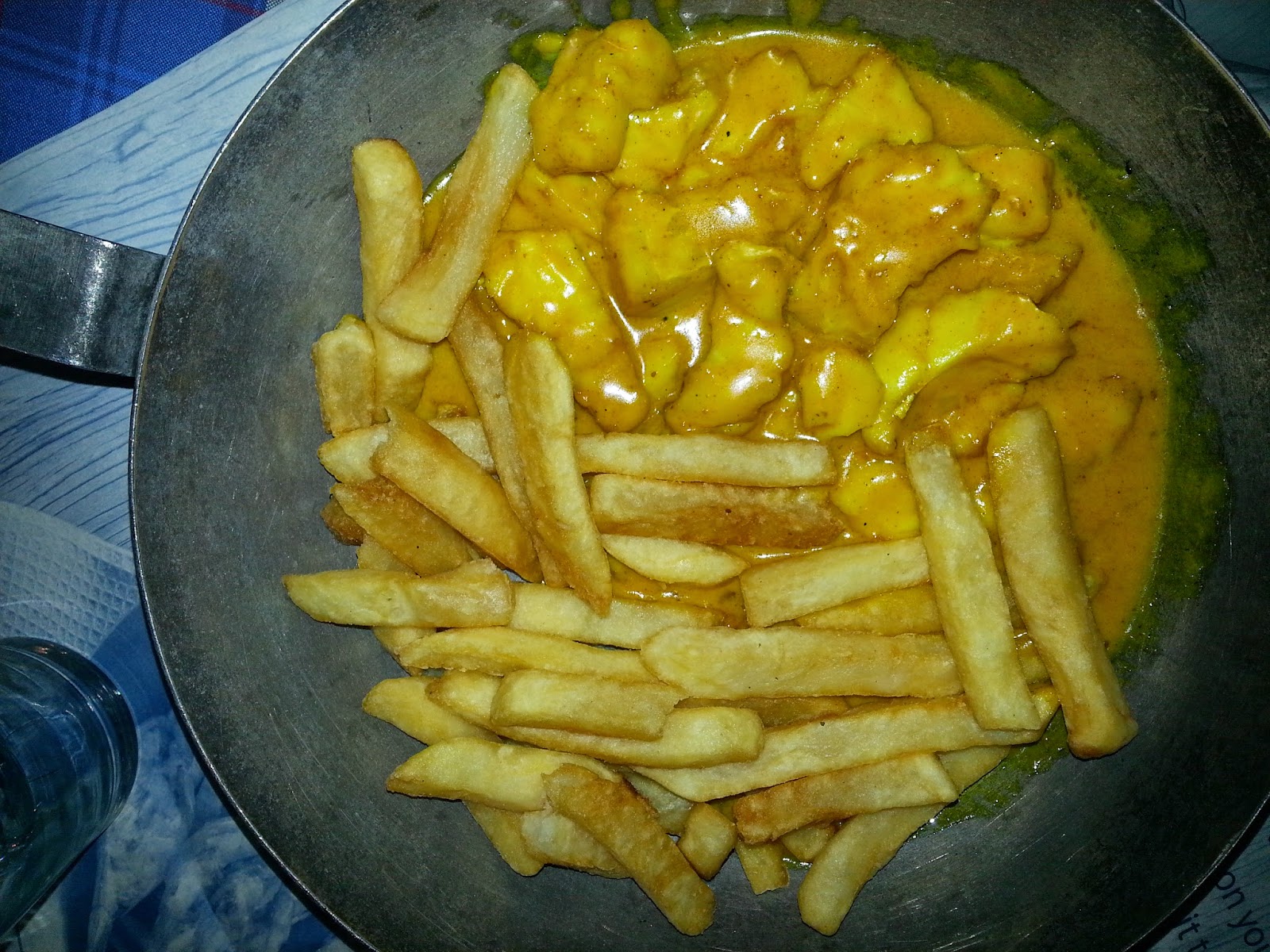 The Kingklip Curry and chips(oh well) was marvelous!! 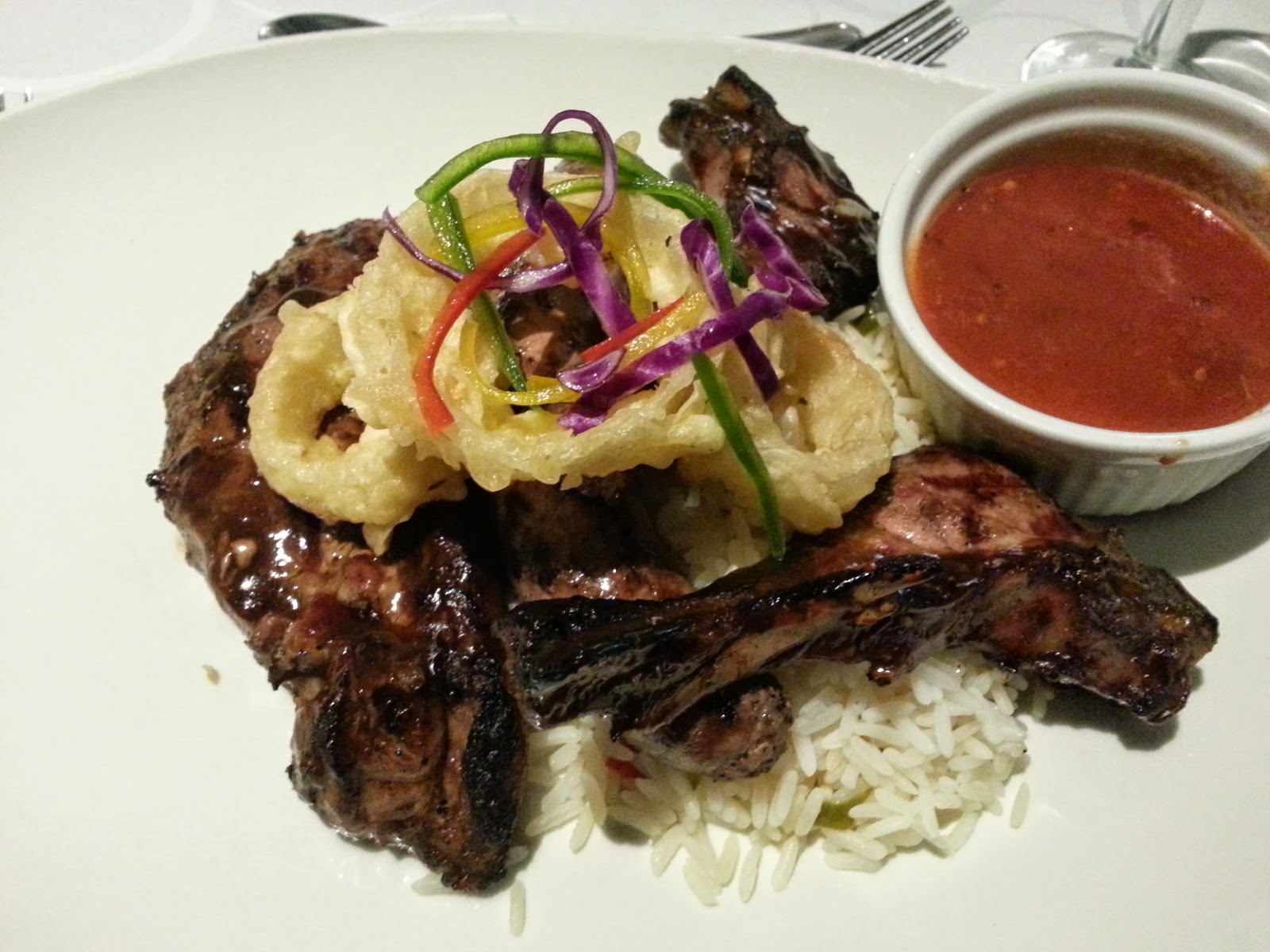 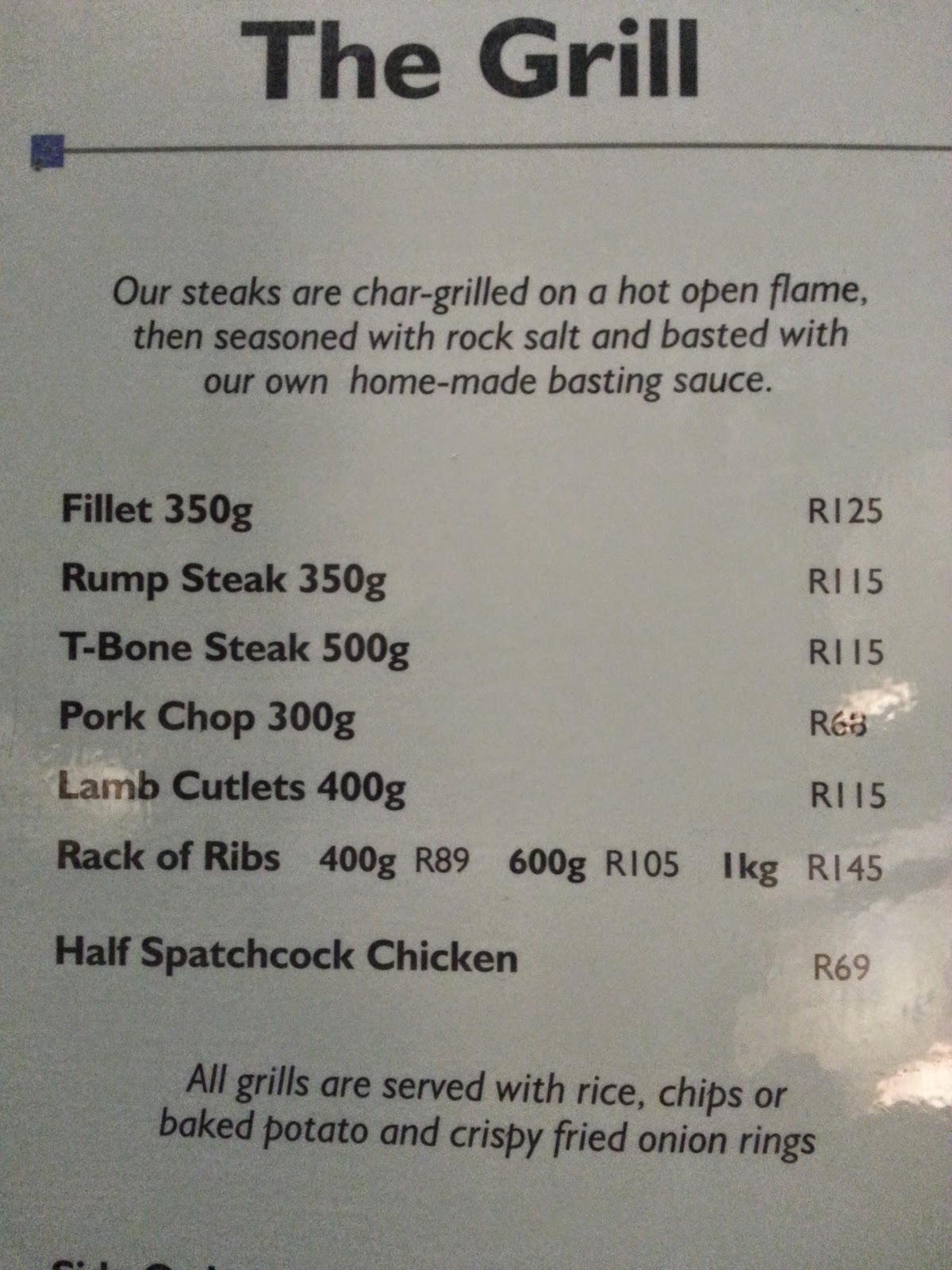 Our Daily Hotel Menu...Exchange rate is basically 10 to 1 so move the decimal one to the left 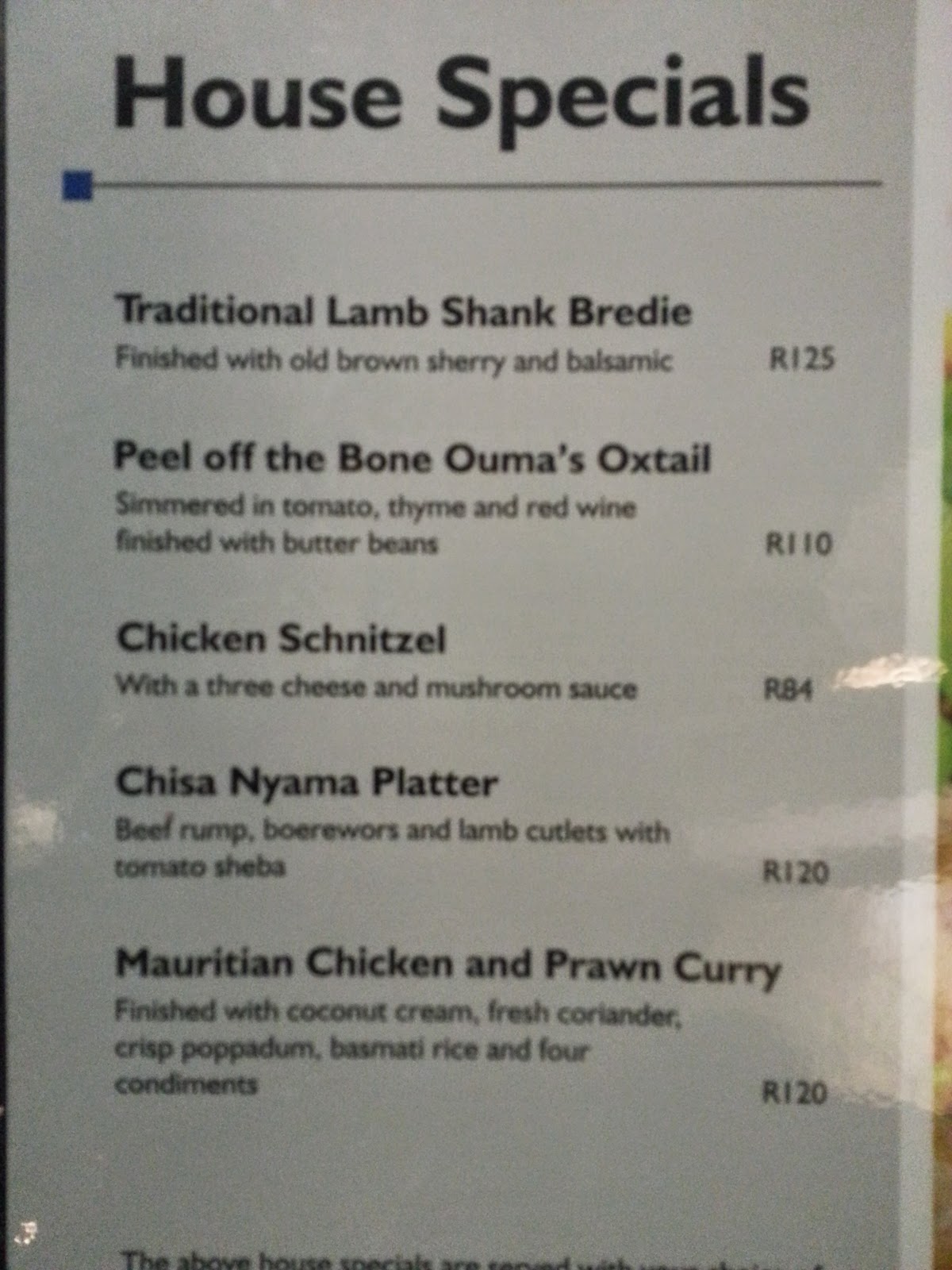 Oxtails Were My Favorite During The Journey 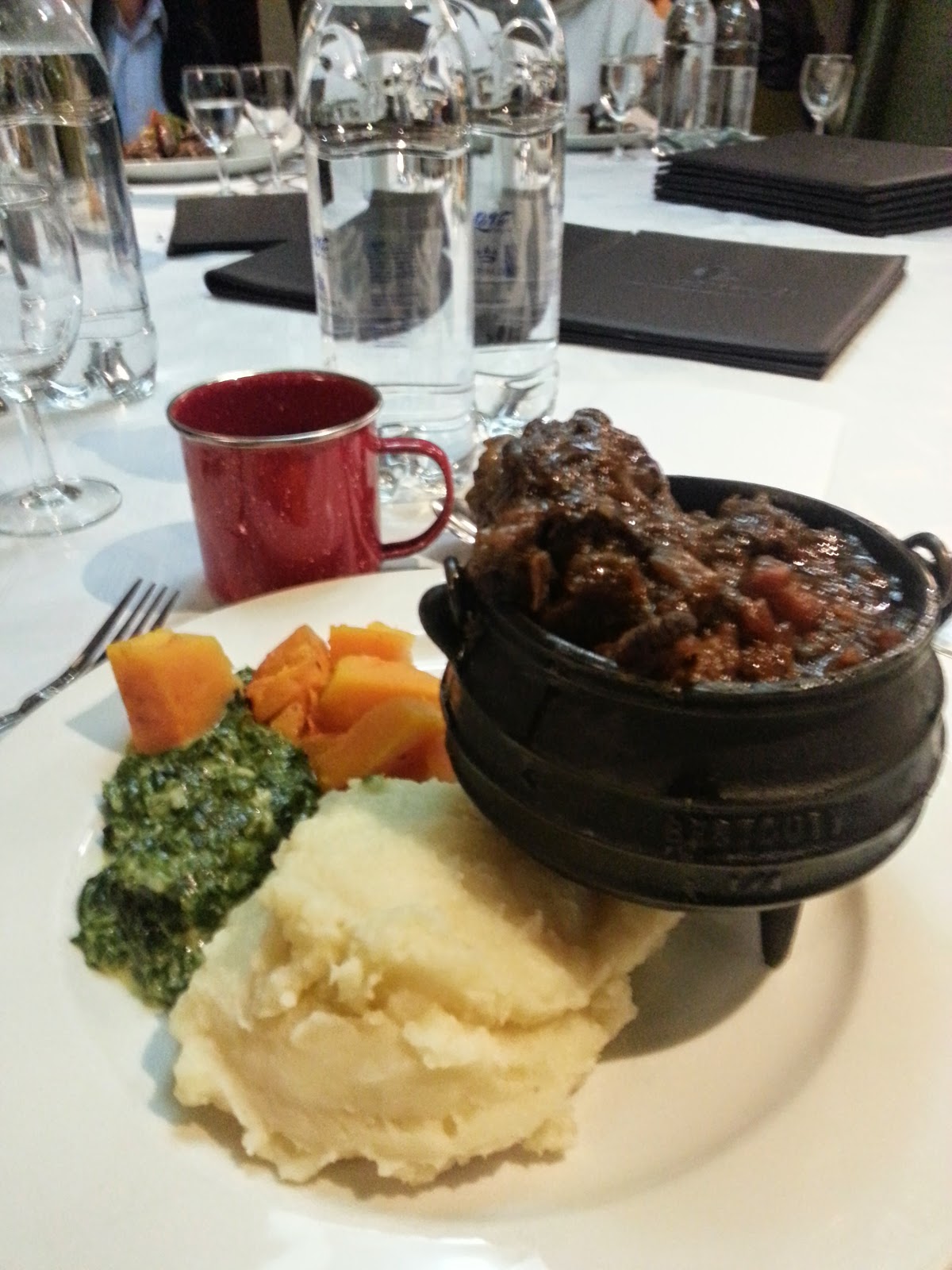 Random Photos Before Our Departure From Mahfikeng
Back to Johannesburg..... 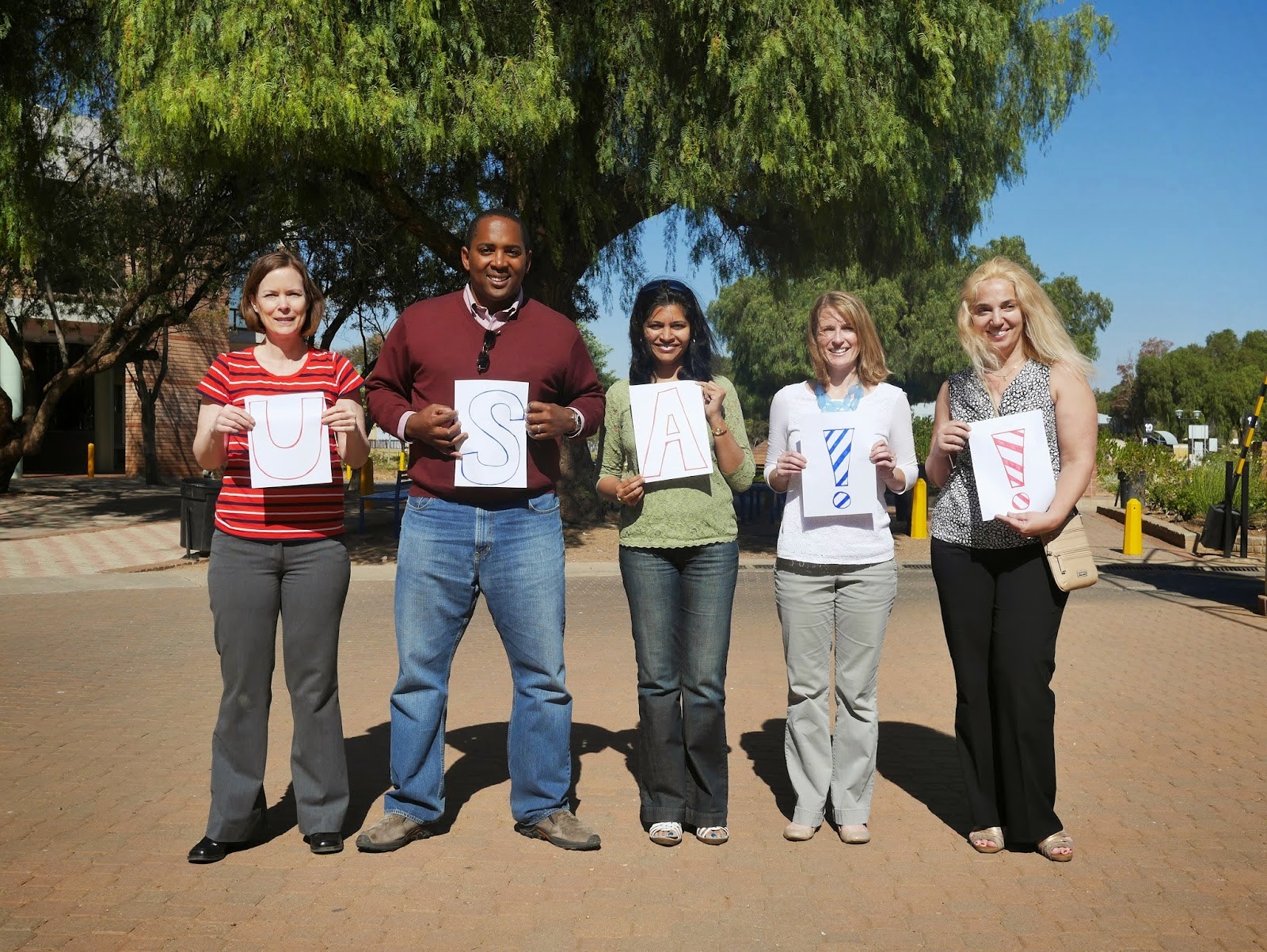 4th of July Photo with all the USA members.  Yes, we were working on campus! : ) 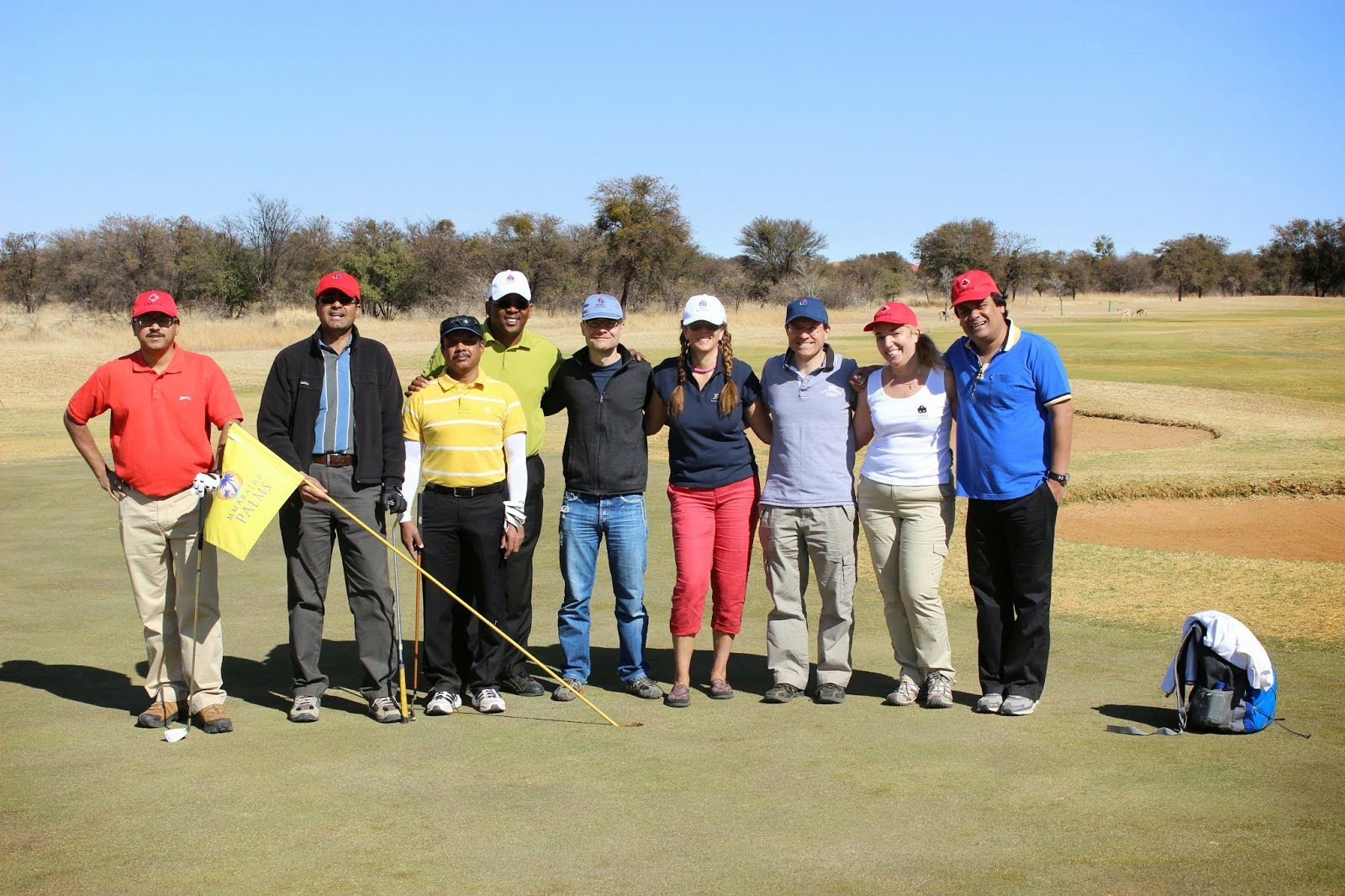 Weekend Fun on The Golf Course Next Door....I would have spent more time here if I knew of it... 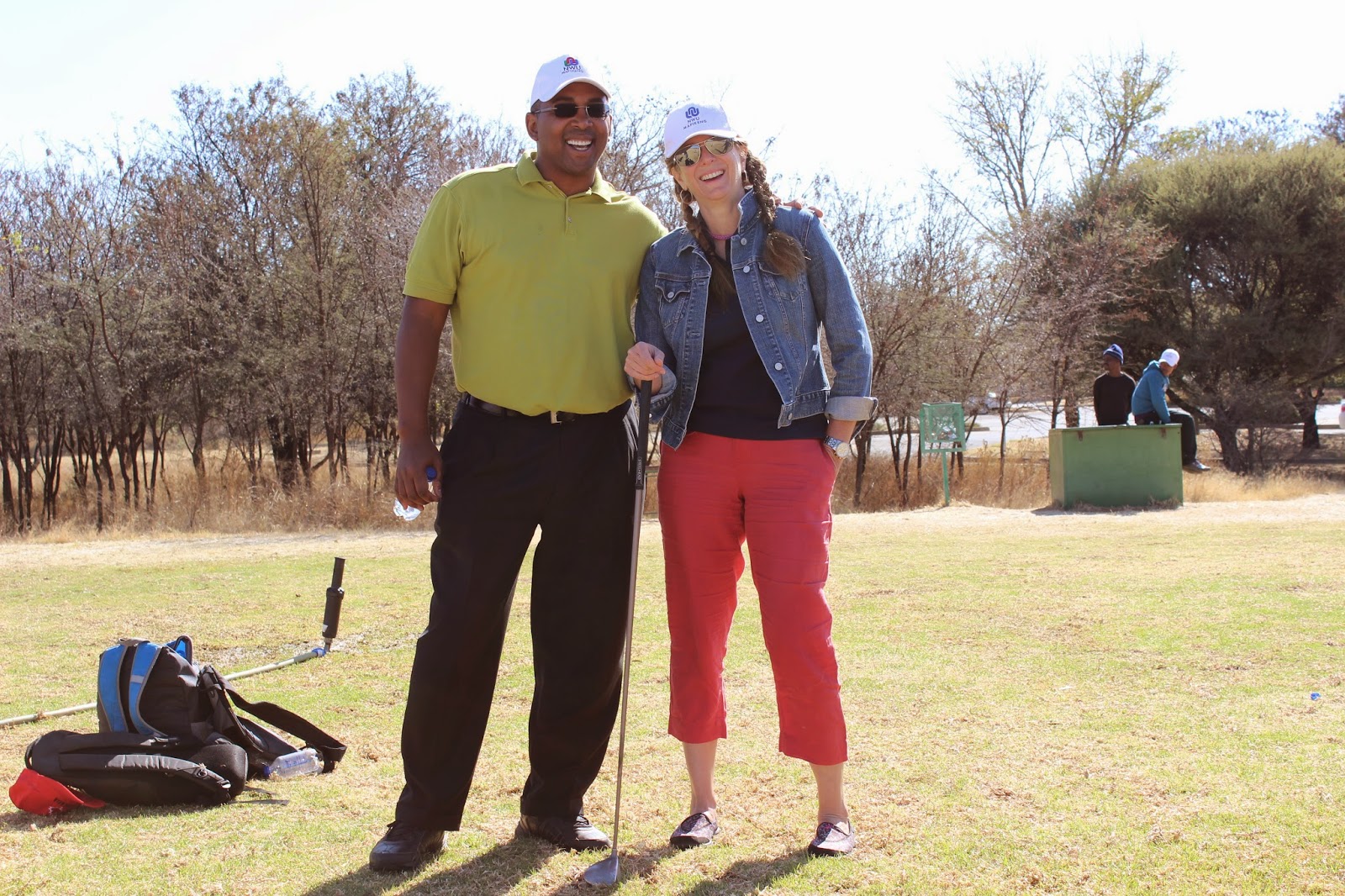 Me and Effie, Fellow teammate from Canada 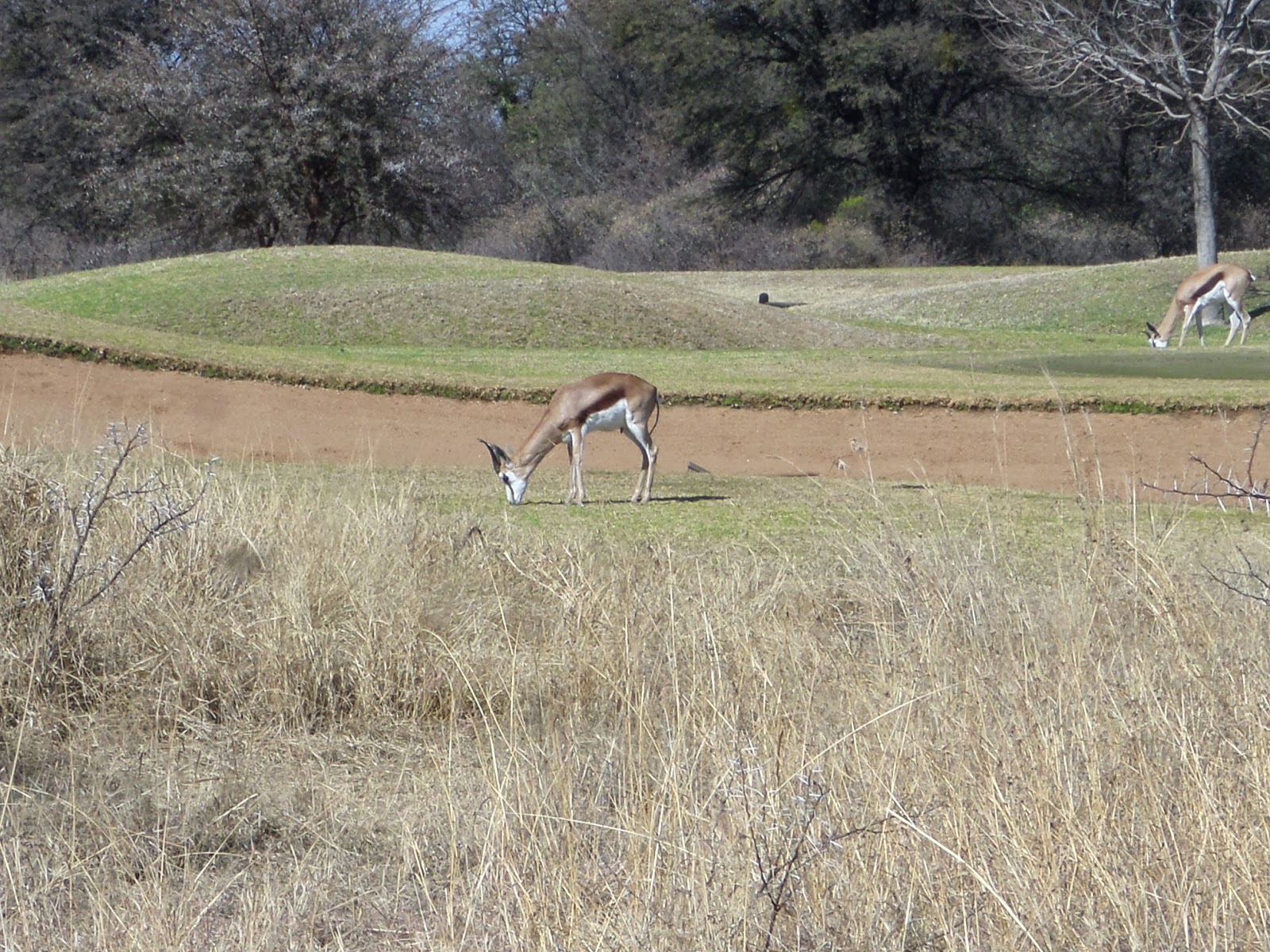 Ever gone Golfing with Gazelles on the Golf Course? 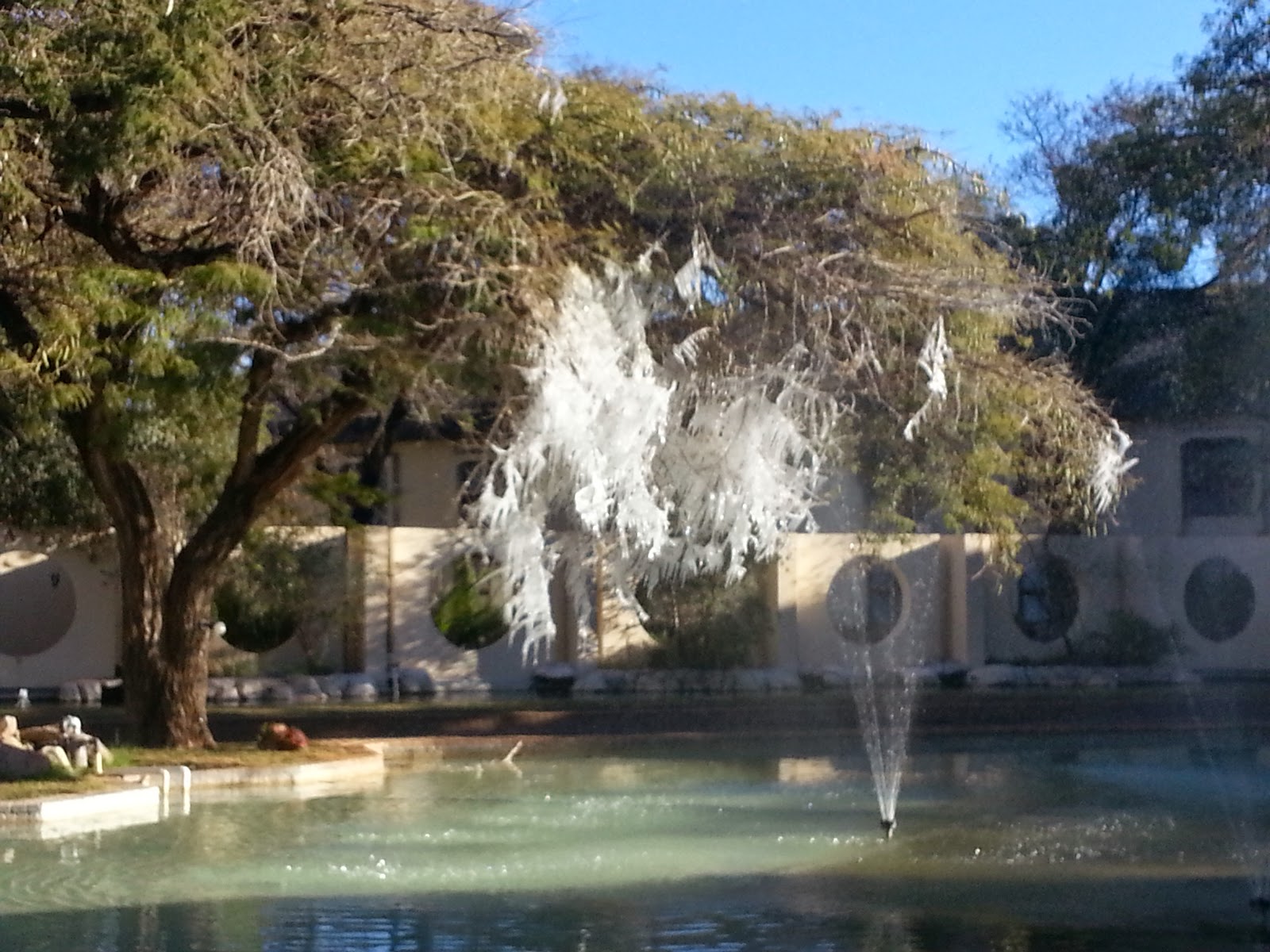 Look at the Ice Forming on Trees from the Evening Freeze!!  Time to Get outta here!!

Posted via Blogaway
Posted by Tarik at 3:43 PM No comments:

Last week, we had a few good events and activities.......


June 25:  Visit To Premier Press Conference
South Africa has nine provinces and we are based in the North West Province.  We were invited to sit in on a live broadcast where the North West Premier, Mr. Supra Ramoeletsi Mahumapelo, was interviewed.  As Premier, he is the top political leader of the province and he was just elected into office a few months ago.  We took a photo with him afterwards but since they were official photographers and haven't shared any photos, we have no evidence!  We were also invited to the SOPA (State of the Province Address) but our credentials ran into problems so we missed it unfortunately.  Our VIP status was short lived afterall!! 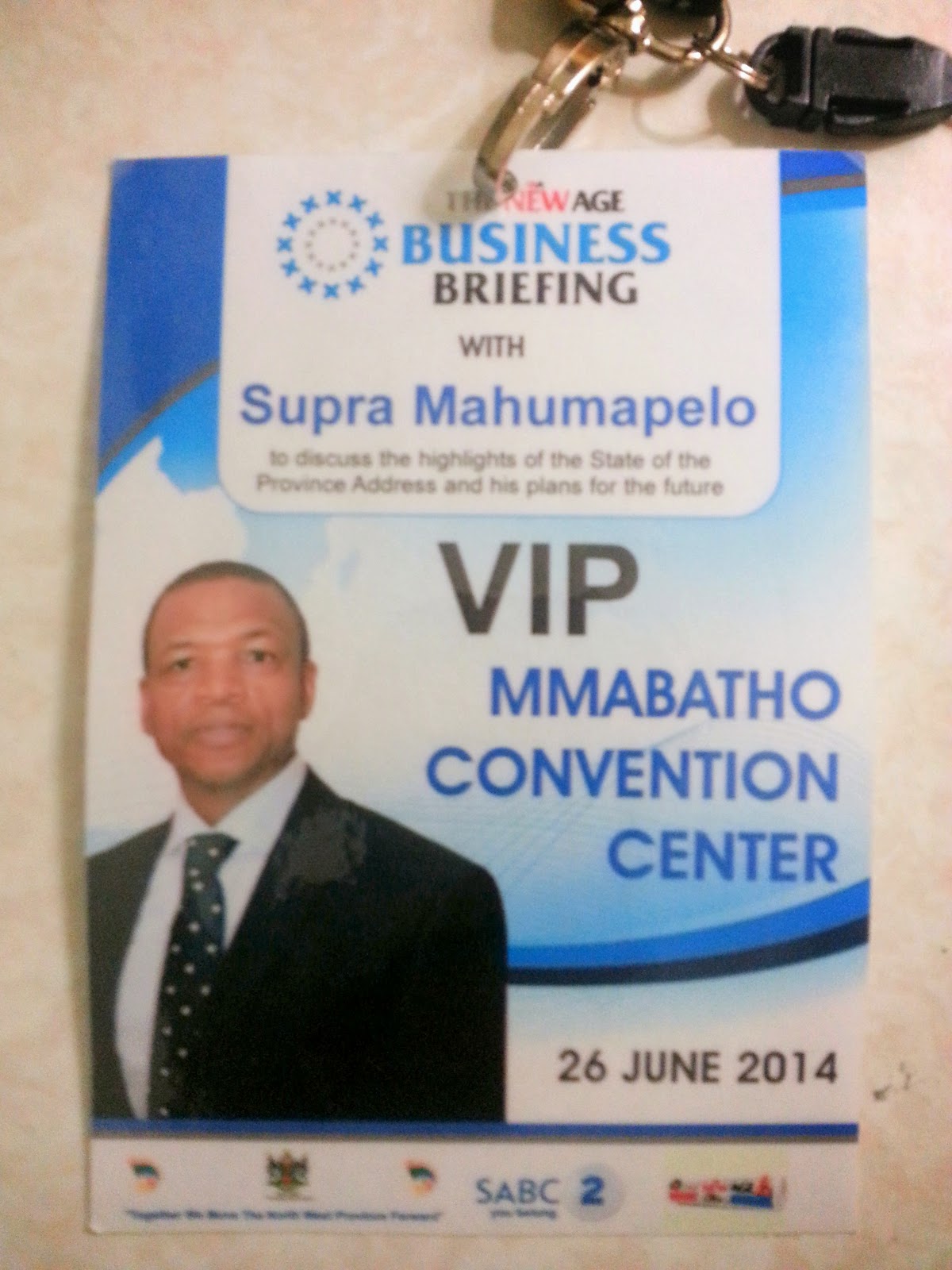 June 26:  Visit to Bophelong Special School
This is school is for severe intellectually disabled learners (SID). The school is situated in Majemantsho village in Mahikeng.  We had a good time with the kids, played games and taught them how to say hello in French, Portuguese, Spanish, and English.
We also had fun playing musical chairs, football (soccer) and other games.  We also enjoyed buying some of the arts and crafts that the students make. 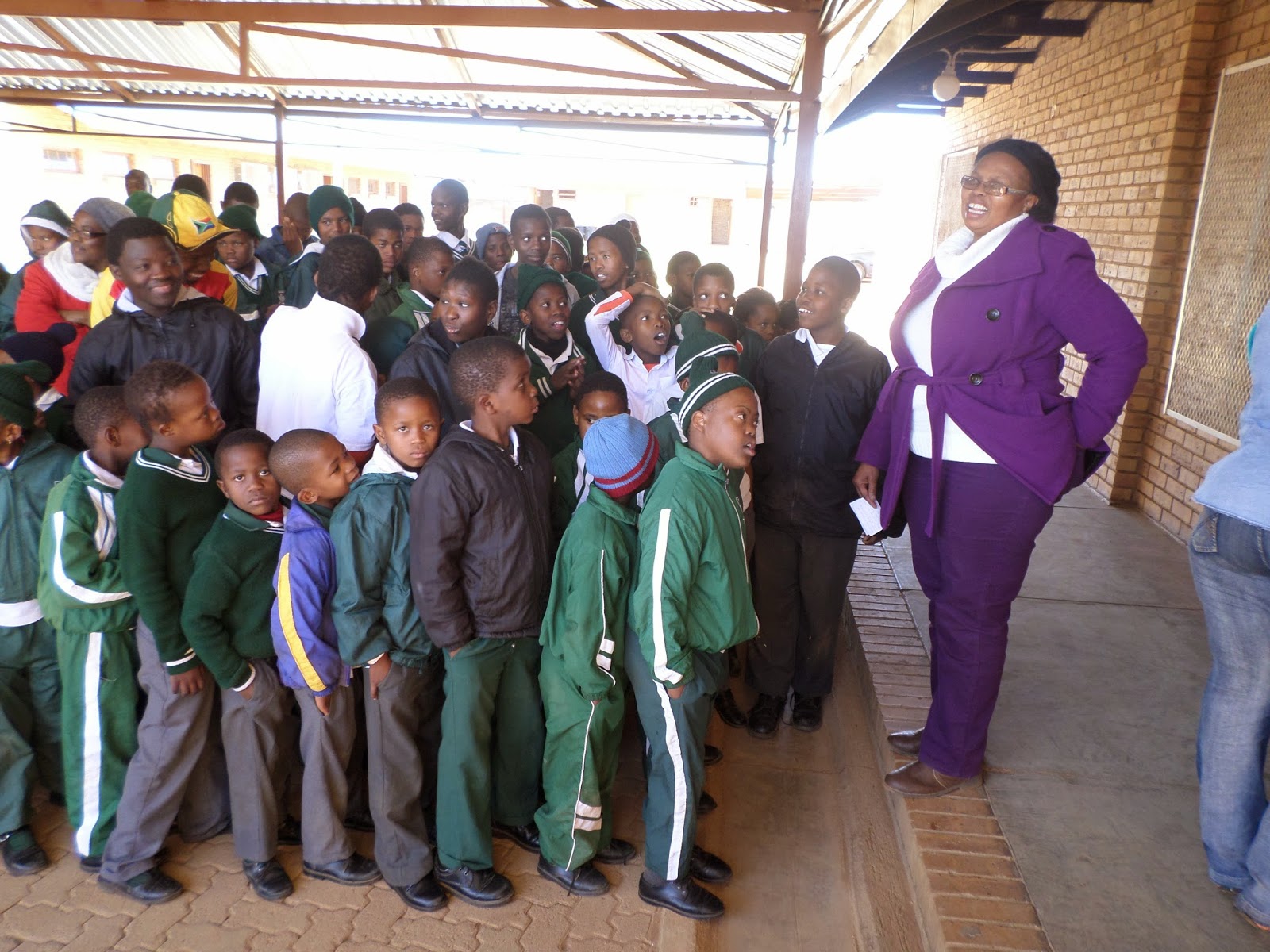 Here is a video of our Grad Student Bokang, dancing in song with the children...