Even though our program enables us to travel around the world and experience new things, it is hard work and actually my weekday routine is fairly consistent Monday - Friday.  Rise and shine at 6am, breakfast at 6:30am and out the door on bus to work at 8-8:30am. However, that changes when the weekends come!
But don't get too excited because when it comes down to it there are only about 2 weekends where we can explore South Africa further.  We also are IBM forbidden to leave the country while on assignment, so its not like we can just fly off to Kenya for a weekend.  I am also only here four weeks or so and the last two weekends are consumed with finalizing client documentation/presentations, which leaves just Weekend 2 and 3. We are approaching weekend 3 but I can tell you I certainly made the most of Weekend 2!!

Our Team headed off to a Game Reserve for the weekend and it was a lifetime memorable experience for sure.  My vegan friends possibly should stop reading right about now.  We stayed at Tau Game Lodge which is a few hours north of Mahfikeng and near the Botswana border.  The resort is a full service location and offers full room and board along with Game rides as well.  So, in the states most people would call this a 'Safari'.  It sounds a bit Indiana Jones to me but our experience was likely a mix of that and Jurassic Park.  I tend to think of these reserves as very large zoos, without cages. I guess you can call that "in the wild" I suppose.

We arrived at night which was a thrill in itself.  No we didn't hear lions as we parked, but it provided some uncomfortable entertainment as cell signals went spastic and "GPS" clearly was laughing at us above somewhere in orbit.   We finally arrived at the Lodge in time for a phenomenal dinner of Eland Filet.  "Eland" is one of the many antelopes we encountered and although there is no hunting at Tau Game Lodge, this "Eland" was nothing short of magnificent!!!
Upon awaking shortly after sunrise, I was able to walk around my room and grounds and realize how appealing the property was overall, including the room I slept in.  it also hit me how unusually cold it was due to winter, which made the outside showers challenging at times.

In the morning, we had a wonderful breakfast and were greeted by a birthday song that I will never forget. Click the image below to watch video. The bass voices from the guys are awesome and watch the guy to the far right who is "getting it in."

We went on two range drives for the day separated by lunch.  Our ranger was Meghan and she was simply remarkable.  She was very informative, knowledgeable and it was clear from the start that she knew what she was talking about. 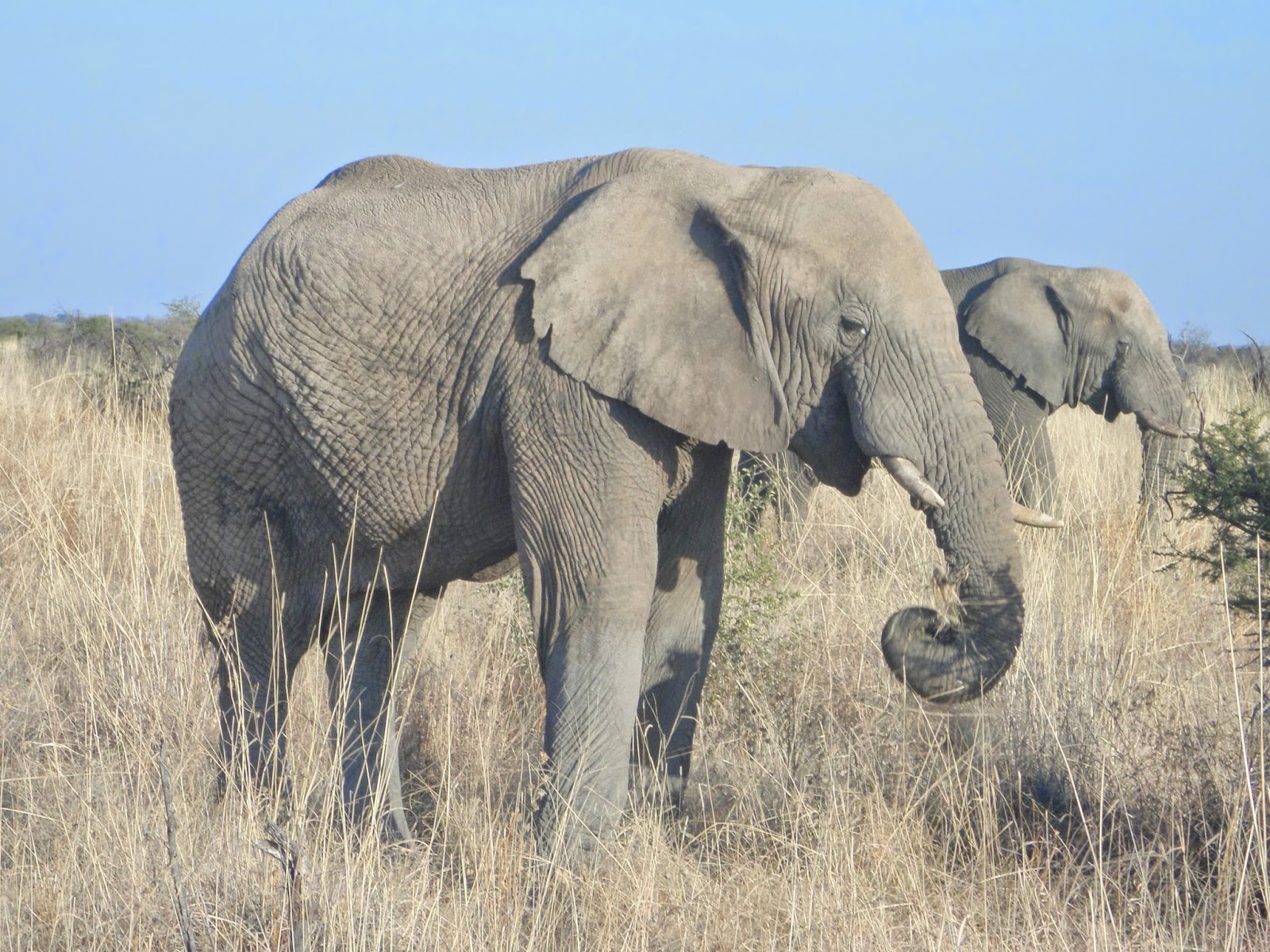 We sat in amazement of their size, gait and charm.  I can never get tired of watching elephants! Unfortunately, we did not stay long as there was much more to come!! 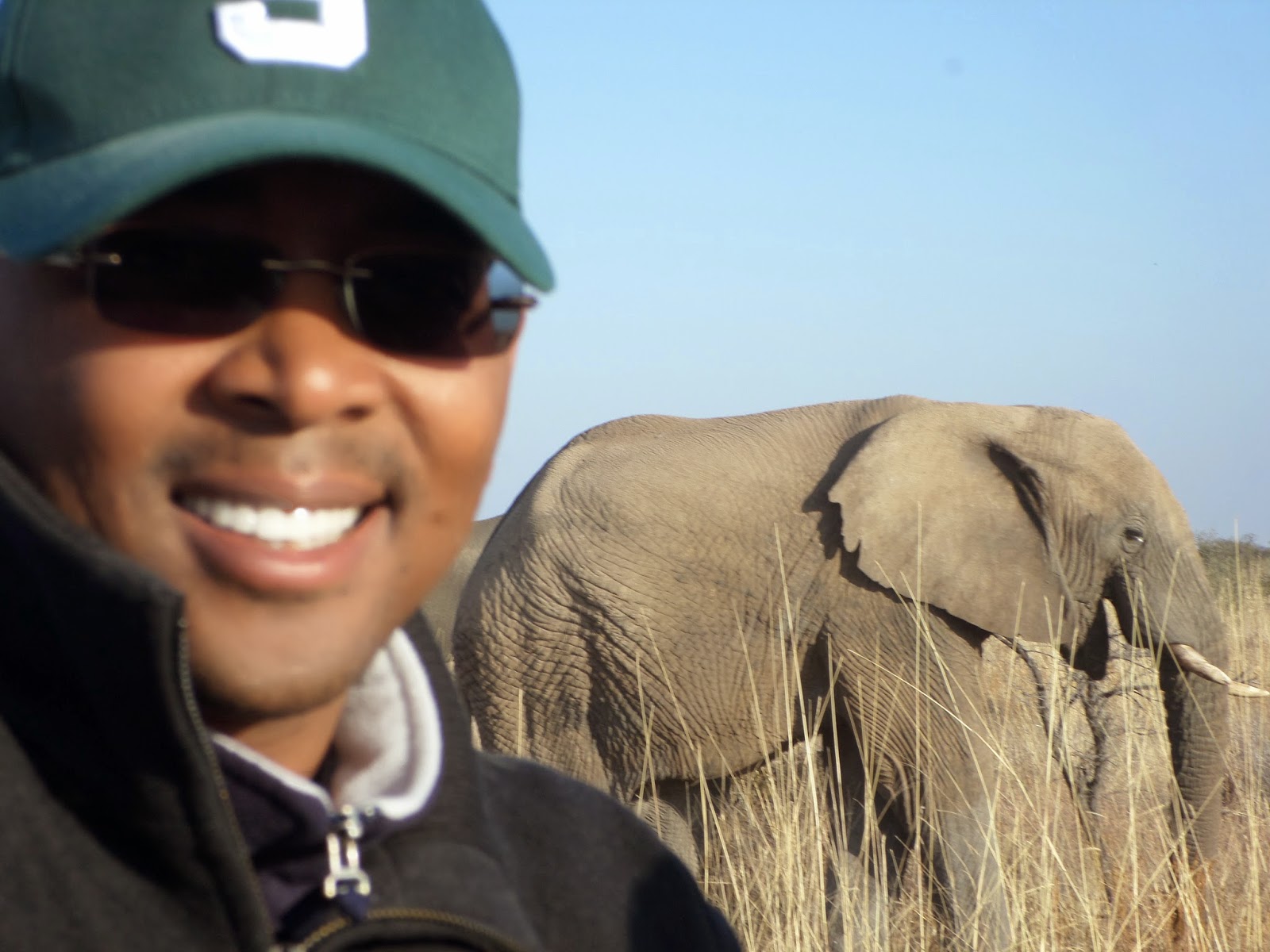 Watch this elephant video that another teammate loaded from their ranger vehicle!  Click on image below!

After the elephants, we saw the only Cheetahs on the reserve.  There were four male Cheetahs.  Long with spotted coats, the Cheetahs were in playful spirit with each other and we got to see them run a bit, but well short of the top speed they can reach as the world fastest mammal.  Sadly, there is a severe shortage of female Cheetahs in Africa so these four guys will likely never mate in their lifetime.  Can you imagine going to a prom each year of your life and never getting a dance? 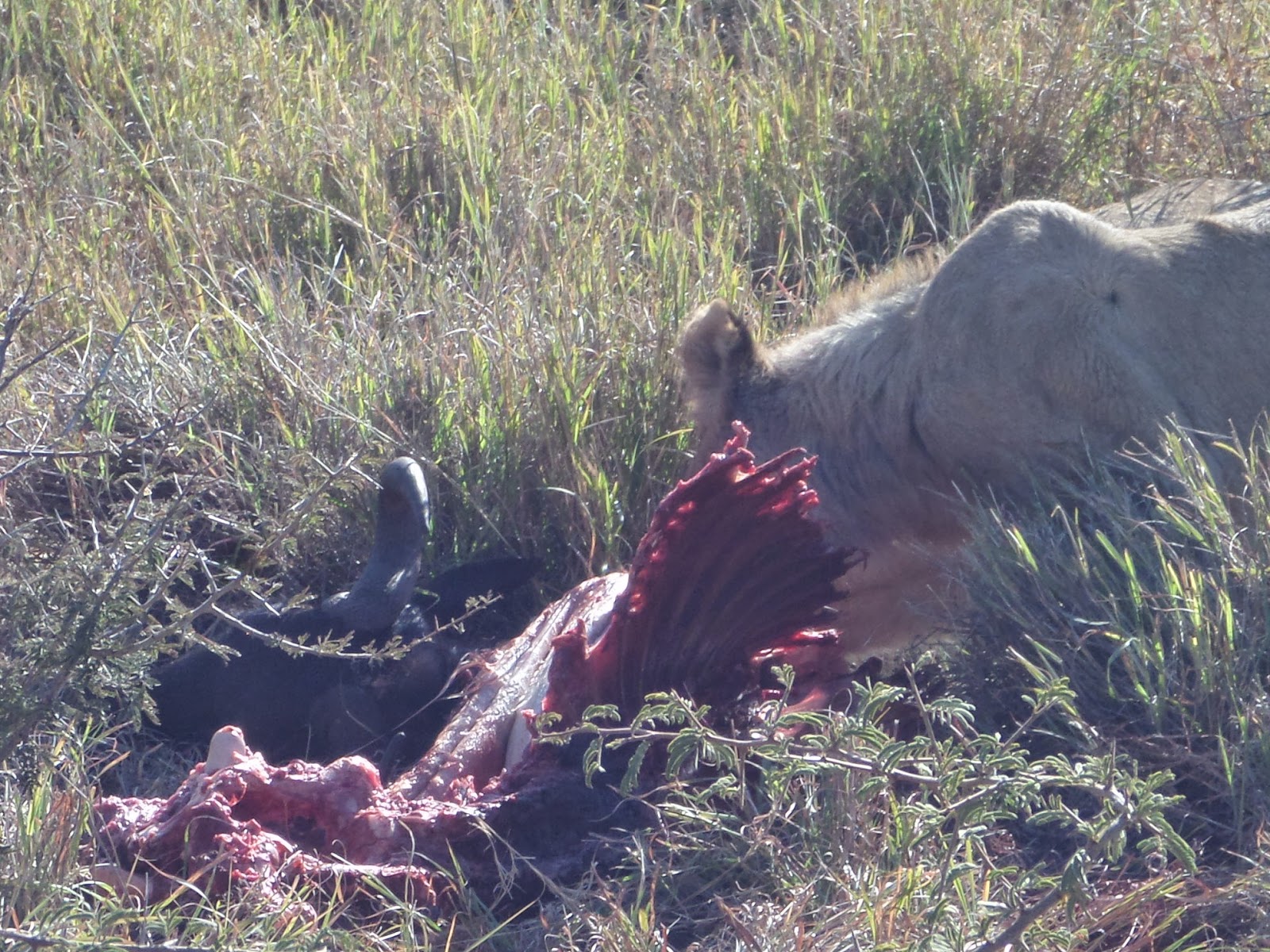 Throughout the day we saw Impalas, Water bucks, Wildebeast and Giraffes from a distance on Day 1.  One  highlight of Day 1 had to be the lions though.  We saw the lions right before lunch and they were feasting on a wildebeast. 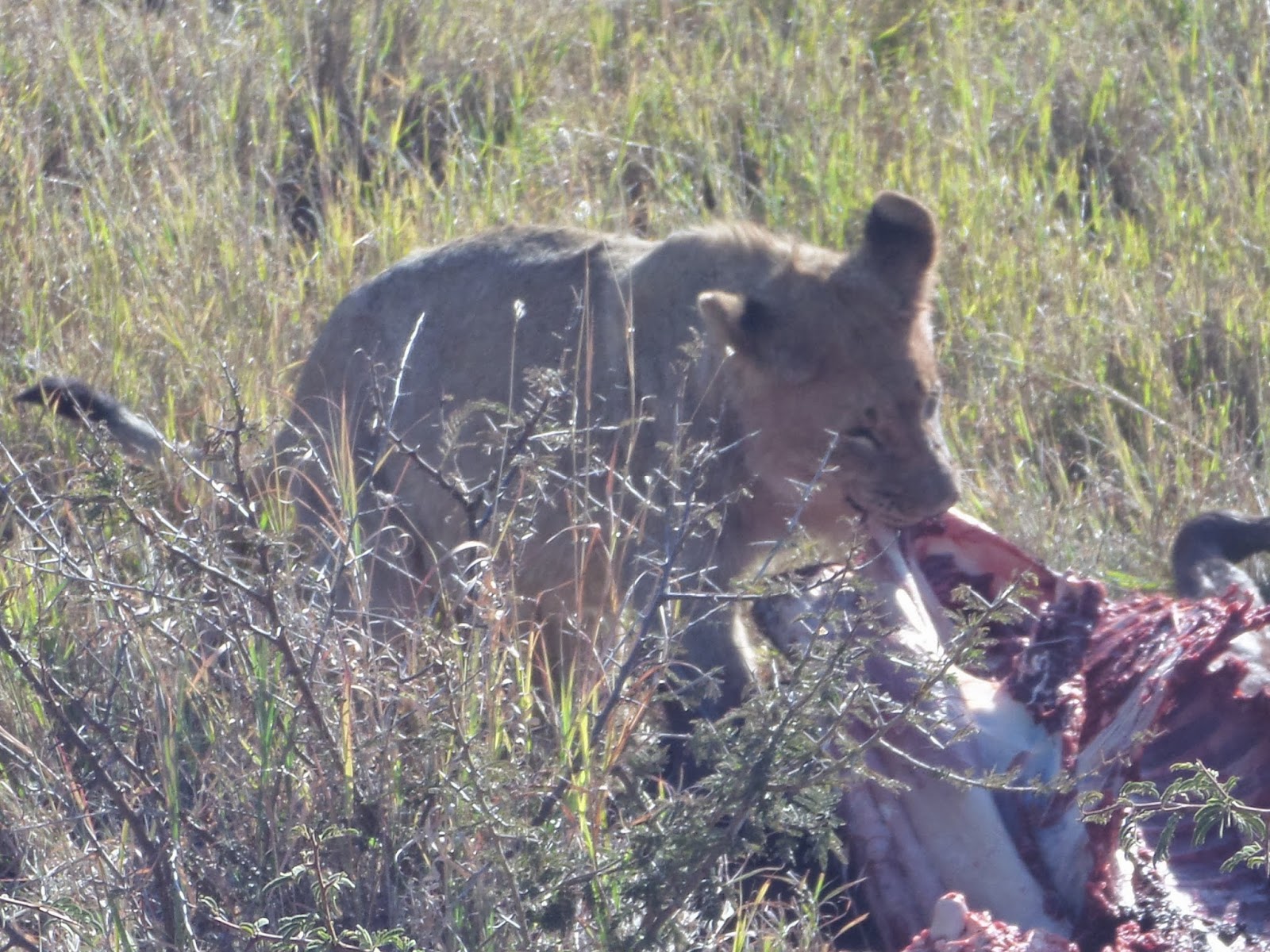 About 2-3 of them were already passed out from the hearty meal.  Since lions never know when there next meal will come so they will eat until they literally pass out from Food Coma.
They really dont have predators so they have that luxury.

After lunch we headed back out and the afternoon highlight had to be the White Rhinoceros.  We literally were driving down the road and the white rhino was coming from the other end.  We turned off our engine to watch and of course I've seen Jurrasic Park, so I said, "Um...Meghan, should we move the vehicle?"  And calmly, Meghan said "No worries mate, he will go around us."  Sure enough that's exactly what he did.  We been asked not to post video/photos publicly of rhino's which I will oblige due to poaching risk.  Feel free to reach me privately if you want to see video/photo of the white rhino.  Magnificent!

We closed the day with a lion night kill that Meghan found in the darkness of night.  It took awhile but she knew of the general area and then suddenly the floodlight hit the eyes of the 3 male lions who were feasting on a wildebeest recently taken down.

Random photo:  Something is certainly wrong with this label.....

Skipping to Day 2, the sightings were just not that great.  But hey, it was a Sunday, perhaps these animals are Union Workers and they just weren't having it.  In either case, as we came around the bend at one point and came upon the most elegant of them all, a lone giraffe!! 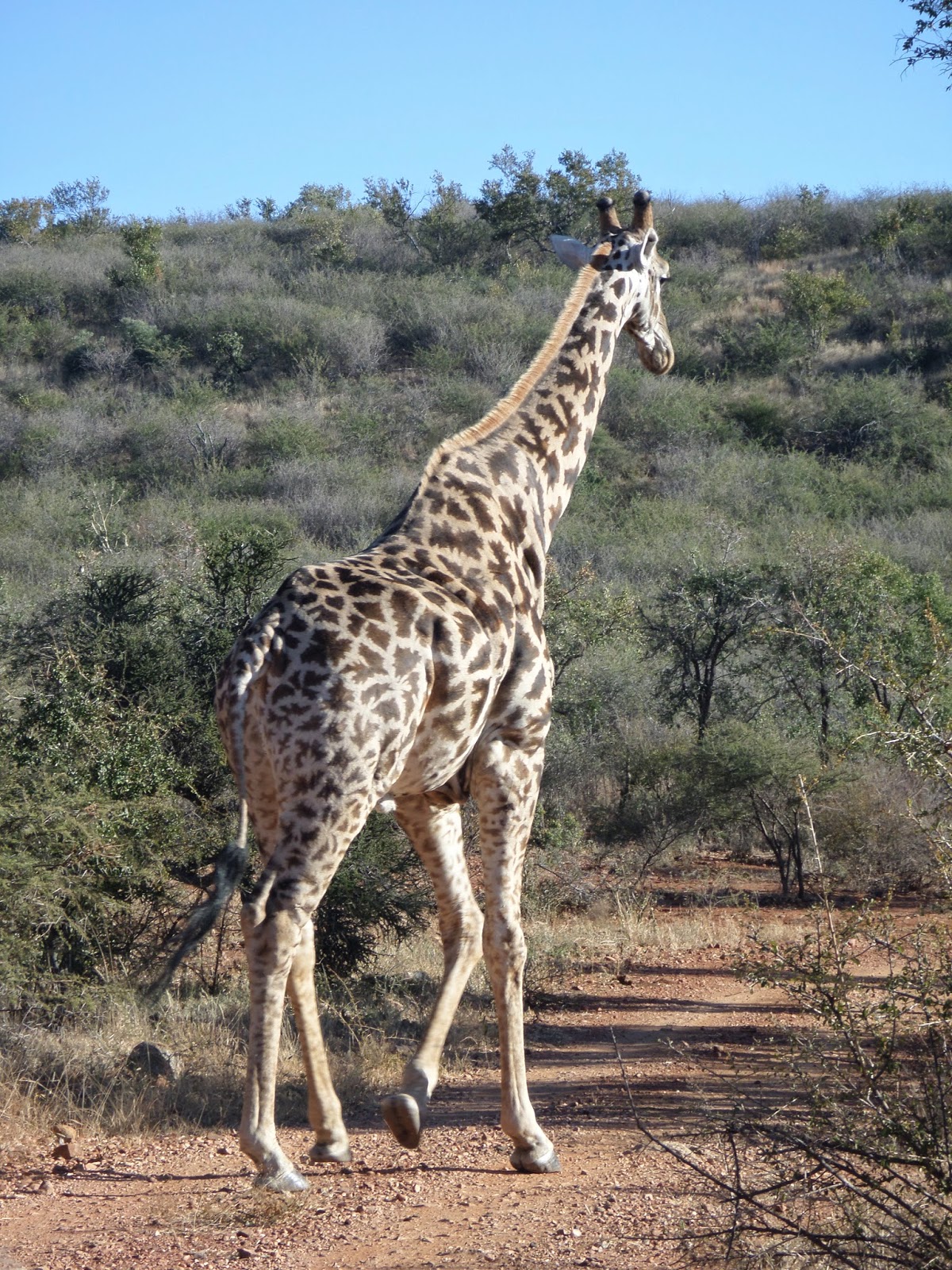 I can't recall the last time I saw a giraffe up close but a ZZ Top song came to mind!! 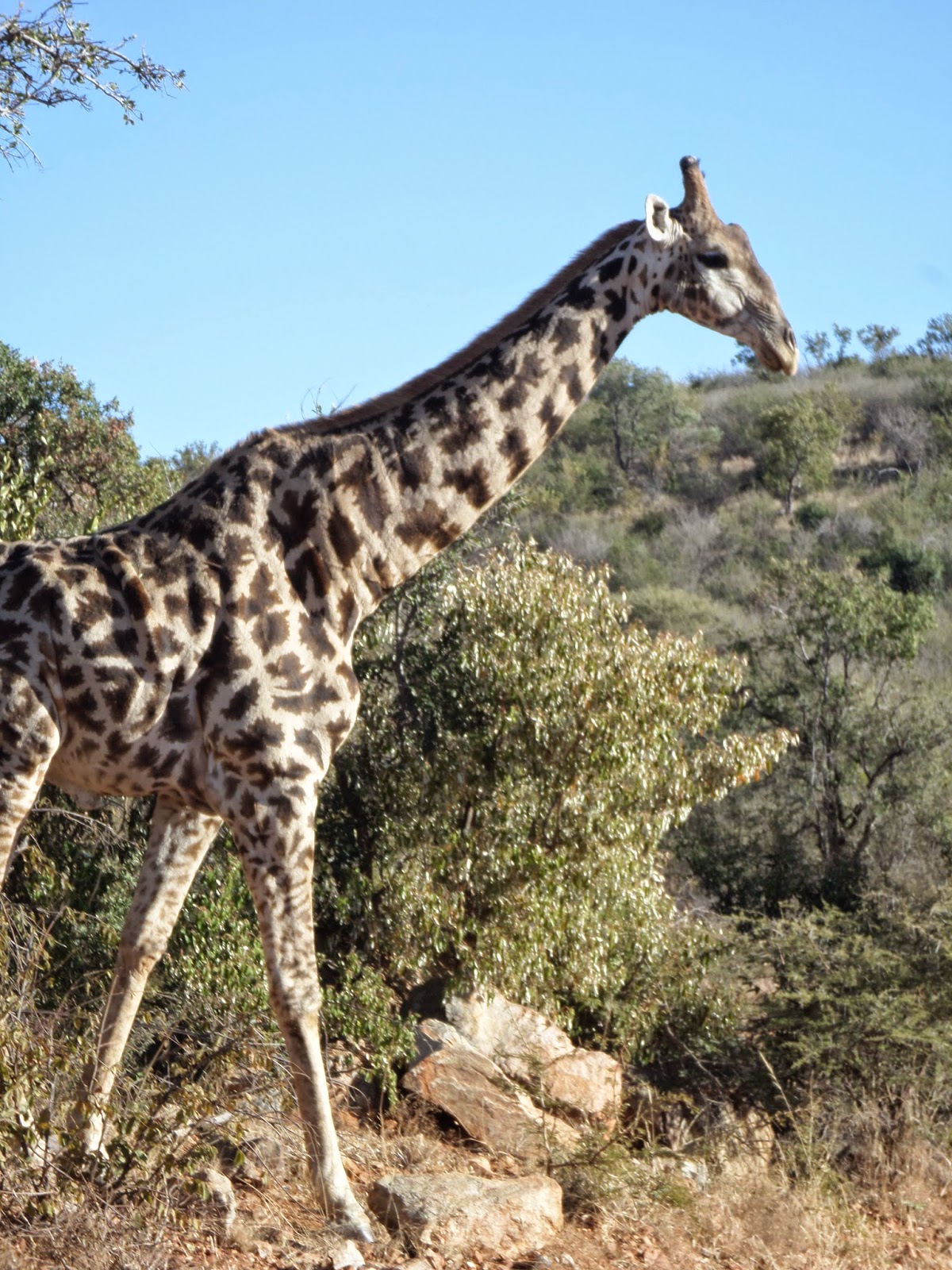 We watched in amazement as the giraffe ate from the tops of trees and then crossed the road in front of us.  What a graceful beauty she was!


We ended the day pretty much where we ended with a large group of elephants, just meandering through.
So that was the trip overall and it was great.  I would be more than willing to return to Tau and would highly recommend it for anyone interested.  Not surprising there are a number of these lodges in South Africa and beyond so there should be good choice selection. 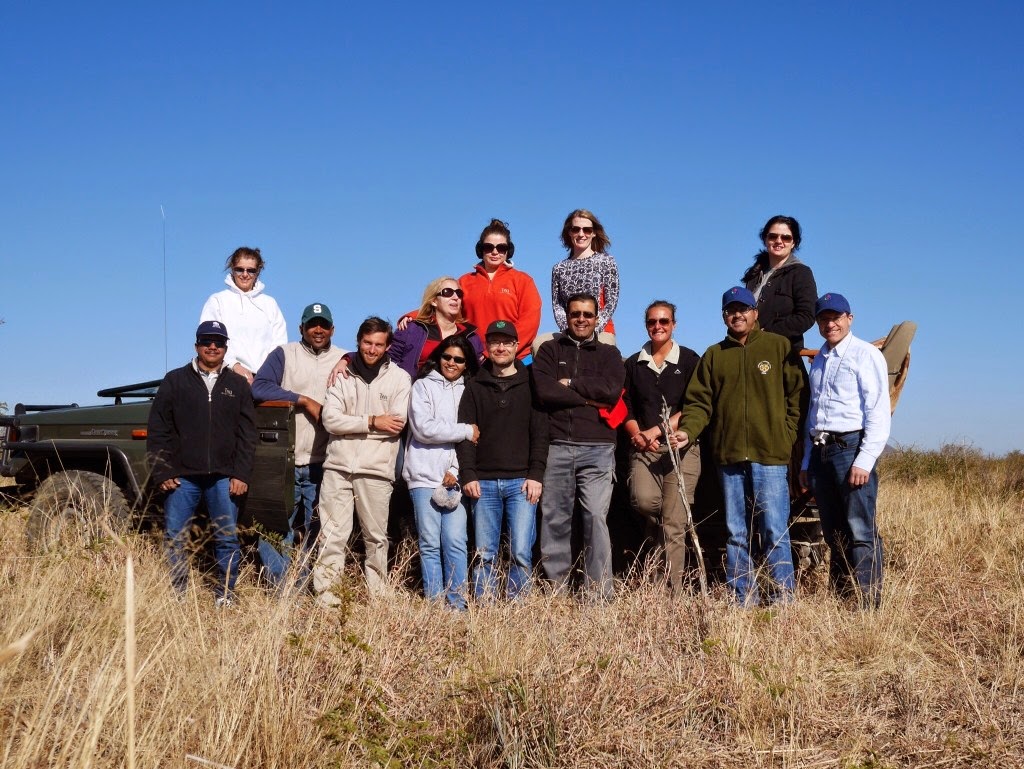 This is the entire team, except for Julie of Minnesota and Suro of India who did not make this photo with us....

Tarik's Tips for Game Reserves:
1.  As amazing as it was, I think 2 days was the right balance.  I'm not sure I would have enjoyed a 3rd day.
2.  Recommend going in winter -- lower rates, no mosquitoes, nights are cold but you are sleeping anyway!
3.  The last row in the ranger vehicle appears to be the best row, but it's the roughest ride by far.
4.  For Tau, go on your birthday or simply create one.  Everybody has a birthday coming up eventually. :)
5.  If your room is cold ask for a portable heater, most lodges should carry one in the winter months.
Posted via Blogaway
Posted by Tarik at 10:46 PM No comments:

The city of Mafikeng is 3hrs North of Johannesburg, South Africa (SA) and goes by a few different spellings, like Mafikeng, Mahikeng.  This will be our home for the next 3 weeks or so while we work at Northwest University.

We arrived here on campus Tuesday and have enjoyed the grounds and surrounding area that will be our home.  Northwest University will be the host of the next "Co-Lab" that SA will position to foster the collaboration and development of e-skills for South African citizens.  This collaborative lab(Co-Lab) will bring together local/national government, Northwest University, employers and other stakeholders to best serve the needs of the Northwest Province to ensure its residents are prepared with the e-skills needed to compete in the Global Economy.  iNesi is leading this charge as part of a South African mandate.  See page 3 of their Newsletter for more details around the work IBM is doing in support of this National initiative.

The campus is very nice and although its very cold in the morning (winter time here), the day and afternoons are beautiful.  For my northern bird friends, you would still generally think this is early Spring!!  I know where to get coffee daily now and we tend to go out for lunch daily using campus transportation.


Monday and throughout the week we have been engaged with meeting University Representatives like the Rector of the University, Prof Mashudu Davhana-Maselesele.  My mother, who has never feared going grey and actually welcomes it, is saying..."I wish my hair was that beautiful".


Our workplace has been in this Senator room(shown below) on campus and where most of our subteam work gets done each day.  We start about 8:30am and run into early evening each day.  The good looking guy on the lower right may be me but I am not entirely sure.  : )


After work one evening, we were hosted by a SA Tourism leader and several provincial dignitaries at a dinner, including one of the composers and original singers of the Lion King theme song.

We were treated to an African Meal on Thursday that made me consider sending a 1 way plane ticket for my wife to join me(smile)!!  It was held in the SABC studios, which is a radio station nearby on campus. 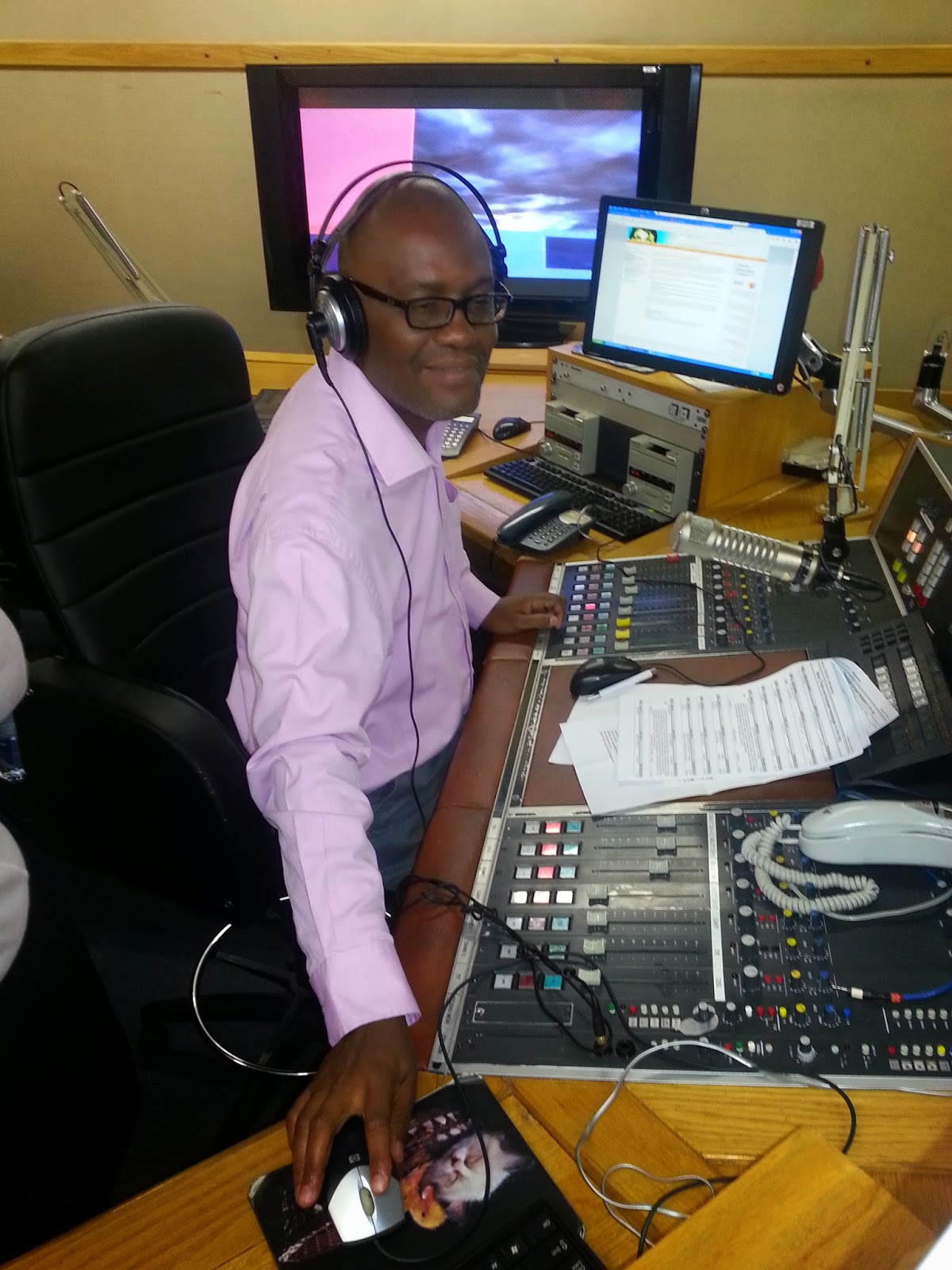 After lunch we took a brief tour of a LIVE radio show studio, which led to an impromptu interview of one of our teammates Valentina, who truly thought she was taking a seat just to be comfortable and had no idea she was about to be interviewed for a few million listeners.


We have just returned this weekend from our first "off the grid" trip to a Game Reserve up near the coast of Botswana, but we stayed in South Africa the entire time...no worries!!!

So my next entry will focus on that first lifetime time experience for me!  I learned a lot.